‘Knuckle Princess’ gets a queen’s welcome in Calif.

‘Knuckle Princess’ gets a queen’s welcome in Calif. 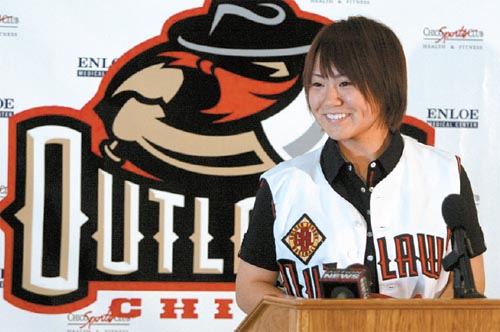 Eri Yoshida speaks at a minor league baseball news conference at Chico Sports Club in Chico, Calif., on May 7, less than two weeks after she graduated from high school. [AP/YONHAP]

CHICO, California - Eri Yoshida is like many girls her age. She has an affinity for torn blue jeans, loves music and giggles uncontrollably, sometimes for no reason at all.

The 18-year-old Japanese teen also throws a pretty mean knuckleball, which she hopes to parlay into a professional baseball career.

Yoshida was introduced at a press conference on Friday as a member of the Chico Outlaws, a minor league team that plays in the independent Golden Baseball League.

“This is such a real opportunity for me to be here and to play for this team in America,” Yoshida said through an interpreter. “I will try the best I can and will work really hard as much as I can. I’d really like to show what I can do on the mound.”

Yoshida already owns the distinction of being the first female to be drafted by a professional team in Japan, having been selected in the seventh round of the 2009 draft by the Kobe 9 Cruise. Now she’s ready to tackle America.

Chico manager Garry Templeton and team president Mike Marshall, both former major leaguers, came across Yoshida while she was pitching in the Arizona Winter League recently. Yoshida pitched in 10 games for the Yuma Scorpions, going 1-1 with a 4.79 ERA.

“She wants to pursue her dream of playing in the major leagues, either in Japan or the United States,” Marshall said. “We thought [this] would be a great place for her to start. She really is that driven.”

What makes Yoshida’s story so unique -besides being an 18-year-old female trying to make it in a male-dominated sport - is that her primary pitch is a knuckleball. She taught herself to throw the pitch after watching videos of Boston’s Tim Wakefield, and quickly became comfortable with it.

Yoshida met Wakefield when the Red Sox were in spring training this year.

“That was a big surprise to me,” Yoshida said. “There are so many things I didn’t know about but he really showed me how to get a target when I throw the knuckleball. That was the best advice I got.”

Yoshida is expected to pitch in an intrasquad game for Chico this week. The Outlaws will be in spring training for the next two weeks before opening the regular season at Tijuana. Yoshida likely won’t pitch until the team returns home in late May.

When she does, she’ll become the first woman to play professionally in America since Ila Borders in 1997.