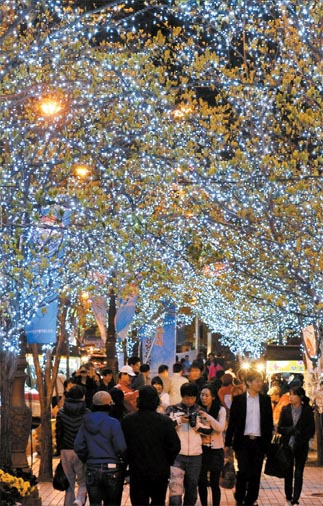 The May Snow Flower Festival hosted by Yuseong District Office in Daejeon usually celebrates the fringe tree’s tiny white flowers that resemble snowflakes. This year, visitors got the trees but no flowers after the district office moved the three-day fair from May 8 to April 30. Instead, trees along the streets of Bongmyeong-dong, Daejeon, were hung with white lights. By Kim Seong-tae

Spring festivals are meant to mark the start of a new season, attract visitors and promote local products.

But with a clutch of the fairs kicking off in advance of the June 2 local elections, some people are complaining that local officials are turning what’s meant to be a celebration into a campaign tool.

That seemed to be the case in Daejong recently, when visitors hoping to enjoy the fringe trees at the May Snow Flower Festival - so named because in blossom, the trees’ tiny white flowers resemble snowflakes - had their hopes dashed.

“Where are the flowers on the trees?” one tourist asked his friend.

“I took the time to come all the way out here to see the beautiful flowers because I really liked last year’s festival. It was full of flowers and that gave me the scent of spring,” said Choi Yeong-hun, a 60-year-old tourist from Suwon, Gyeonggi.

“This year, the flowers are nothing like what’s being promoted on the government’s Web site. The government had pictures of trees full of flowers, but in reality, there are only light bulbs hanging there. 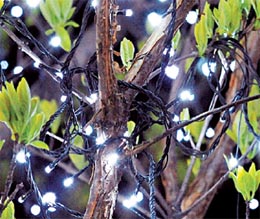 But this year, Daejong’s Yuseong District Office Head, Jhin Dong-kyu, scheduled the festival for April 30 to May 2 - before the May 5 deadline by which he must resign his post, and stop campaigning, if he wants to run for re-election to another four-year term next month.

Critics say he moved up the date of the festival, which this year cost 450 million won ($389,000), up 50 million won from last year’s, to serve his own purposes. And indeed, Jhin and his aides were seen shaking hands with visitors among the fringe trees.

But Jhin says he changed the schedule simply because he expected that global warming would make the trees bloom earlier.

“This festival can’t go on after the flowers fall from trees,” he said.

Mother Nature, or Lady Luck, worked against him. Few flowers adorned the trees, despite the Yuseong District Government’s efforts to brighten things up - or hasten bloom - by coiling some 300,000 LED bulbs among the branches. And few visitors were satisfied with the substitution.

“It wasn’t right for the Yuseong District Office to feature the festival sooner,” said a Yuseong resident surnamed Park, 37. “The district head went ahead with that plan just because of his political interest behind the festival.”

If he did, Jhin wasn’t alone. According to the culture ministry, of the 813 festivals this year, 187, or nearly one-quarter, were scheduled for April and May - prime electioneering season.

Kim and Yoon, both of whom are running for re-election on the Grand National Party ticket, strolled the streets of festival, greeting visitors and shaking hands, for several hours.

“I can’t get away from the feeling that the festivals are now being used for political campaigns promoting local government officials’ achievements and themselves,” said a visitor who declined to have his name published in the newspaper. “Isn’t the festival for residents?”

But a Daegu City government official retorted that the event needs the mayor’s presence.

“The host is the Daegu city government, and the mayor should be there,” the official said.

Whether they’re meant to attract visitors or potential voters, some festivals are failing in even that. The Imsil County government’s festival is a case in point. Since 1984, the North Jeolla county has held a festival to remember a widely told legend from the Shilla Dynasty about a brave dog who lived in Osu. The story goes that the dog saved his drunken master from dying in a burning field by running back and forth to a nearby stream to sprinkle water around his prone body. When the master finally awoke, the dog was dead.

This year’s Osu dog festival was held from April 30-May 2. But on May 1, it wasn’t busy. The 6,600-square-meter (1.6-acre) dog park was set up with a fashion show, an obstacle race for pets, handicraft stalls and sales areas, but fewer than 1,000 visitors and dog lovers came to take a look.

“I’m bored. No one wants to make a handcraft with rice straw,” said a person in charge of the straw craft venue, who’d hoped the main stage would be as packed with potential customers as it has been in the past. “I probably should take all materials I prepared for visitors back.”

The total cost for this year’s festival was 200 million won, and despite the chance it offered to shake the hand of Kim Hak-gwan, who chairs the Imsil County Council, one Imsil resident said it wasn’t worth it.

“Farmers think twice when they spend a 10,000 won bill, but look what country government has done,” the resident said. “The government has lavishly spent a large amount of money on this rubbish festival.”