Giants look up to a tall foe in SK Wyverns

Giants look up to a tall foe in SK Wyverns 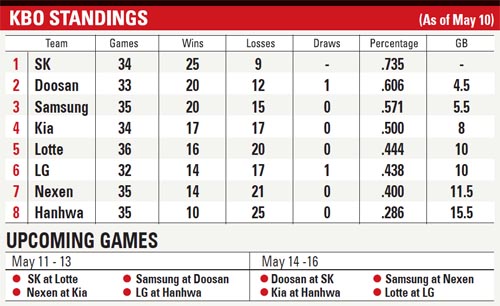 They’ve met their toughest challenge so far this season, but the real test may lie ahead for the Lotte Giants.

After winning four out of six games in two three-game series last week against third-place Samsung and second-place Doosan, the Giants must face the league’s top club, the SK Wyverns. And ever since American Jerry Royster was hired the Giants’ manager in 2008, the Wyverns have been the team that gives the Busan-based squad fits.

Royster and the Giants started well against the Wyverns that year, winning five and losing three in April 2008. But they fell to pieces after that, charting up 10 successive losses against SK.

In 2009, SK swept Lotte in two regular-season series, and managed a yearlong record of 13 wins and six losses.

The Giants haven’t fared much better against their nemesis since. SK swept Lotte in the three-game series in Incheon April 23-25. Cho Jung-hoon managed a respectable outing against SK’s ace pitcher, Kim Kwang-hyun, in the third game, but that wasn’t enough to save the Giants: “It seemed as though as fielders were playing blindfolded,” Royster said about his team’s defense.

Lotte hopes to turn things around in a three-game series starting tomorrow, but things don’t look good for the team at this point. Cho and Lee Myung-woo are currently excluded from the Giants’ roster and Jang Won-joon and Ryan Sadowski pitched over the weekend, so they won’t be available for the series. Other than Sohn Seung-joon, who is projected to start in the second game, Lotte does not have a respectable starter for the series.

“Kim Dae-woo will get the call in game one, then I’ll have to decide between Lee Yong-hoon and another pitcher,” Royster said.

The team still has hope. Despite its poor track record against SK and a depleted pitching staff, Lotte boasts a strong batting lineup. Lotte is batting .350 as a team this month and is second-best in most offensive categories, including 196 runs. Hong Sung-heun, Lee Dae-ho and Karim Garcia are in peak form, with Garcia and Lee tied for most home runs in the league, at nine each, and Hong leading the league in RBI, with 43.

Also in the Giants’ favor: SK’s lackluster performance last week, during which it chalked up two wins and four losses. But SK will boast a pitching lineup of Kim Kwang-hyun, Song Eun-beom and Gary Glover in the series.

It’s still early, but the tough series that will pit Lotte’s strong offense against SK’s dominant pitching can be the turning point for the Giants in their bid to make the postseason for the third consecutive season.