Pianist is back with Brahms

Pianist is back with Brahms 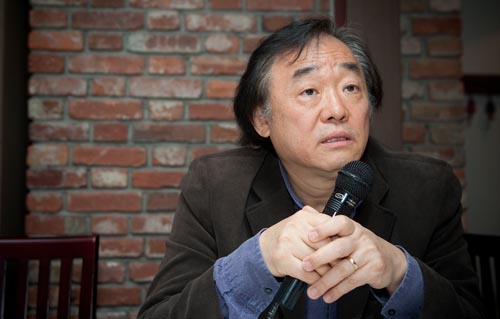 Kun-woo Paik speaks at a press conference last Tuesday at a restaurant in Gwanghwamun, central Seoul. Provided by Universal Music

After a longtime fascination with Beethoven, Kun-woo Paik, one the most influential pianists of the post-war generation in Korea, is turning his focus to Brahms.

Paik, who is known as a “seeker of truth on the keyboard” for his reverent and sincere approach to musical interpretation, had long immersed himself in the music of Beethoven. Between 2005 and 2007, he recorded all 32 Beethoven sonatas and in late 2007 he played them all in a seven-day concert series.

But he wants “to concentrate on Brahms for the time being,” he said in a press conference in Seoul last week.

Earlier this month, Paik released an album featuring Brahms Piano Concerto No. 1 in D minor, Op. 15, which was performed with the Czech Philharmonic Orchestra under the baton of his friend of 20 years, Eliahu Inbal. The new album also contains Variations on an Original Theme in D major, Op. 21, No. 1, and Theme and Variations in D minor. 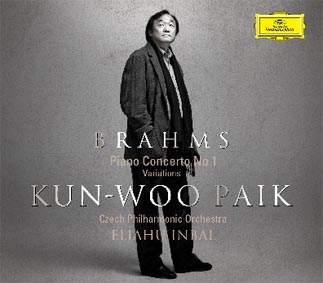 Paik’s new album, released on May 4, features Brahms Piano Concerto No. 1 in D Minor and variations.

Paik will play the Brahms concerto later this month in Seoul with the Frankfurt Radio Symphony Orchestra, which is led by reputed conductor Paavo Jarvi.

His love affair with the first Brahms concerto dates back to some 50 years ago, when he was attending the Juilliard School of Music.

“In my late teens, I was immensely impressed with the British movie ‘The L-Shaped Room,’ which dealt with the romance between a poor couple. The movie’s theme song was Brahms’ Concerto No. 1, and it was so intense and beautiful. I have practiced the work many times since, but this is the first time I have recorded it,” he said at the conference.

He said he opted to record with the Czech orchestra because he loves the “thick, tar-like sound” that only Eastern European orchestras can create.

The concerto, which Paik says “gives the feel of the dark color of northern Germany,” was composed when Brahms was 25 years old. The piece, Paik said, is a “highly mature work” for someone so young, but the pianist speculated that it was “probably because the composer’s mother was 44 when he was born and the woman he loved, Clara Schumann, was 14 years his senior.”

Paik’s own wife, Yoon Jung-hee, is four years older than he is. Yoon was one of the most admired movie actresses in the 1970s and left the film scene after marrying the pianist.

Yoon, who accompanied Paik to the press conference, has been attracting attention for her starring role in Lee Chang-dong’s movie “Poetry,” which is set to compete at the Cannes Film Festival, opening today.

“I am very proud of my wife for her appearance in the movie, and what amazed me more was how she could have so immersed herself in the role,” he said.