Beyond the economy at the G-20

Beyond the economy at the G-20 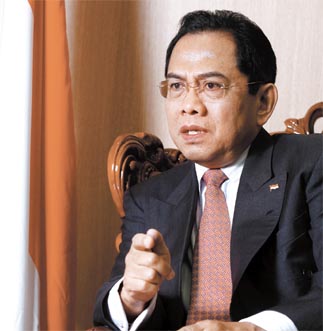 Indonesia welcomes the Group of 20 as the premier forum for international economic cooperation but hopes to see the world’s largest economies address other important global issues such as climate change and food and energy security at the summit in Seoul later this year, Jakarta’s top envoy to South Korea said in a recent interview.

Indonesian Ambassador to Korea Nicholas T. Dammen said his government appreciates that the group will become the premier forum for resolution of global economic and financial issues, because the Group of Eight and Group of Seven were too small to represent the current global economy.

“In the G-7 and G-8, the only Asian country included is Japan,” he said. “Korea, Indonesia, India and China are not in those groups, and that’s not an accurate representation of the global economic landscape.”

“The G-20 represents the world better,” he said, adding that Indonesia, in cooperation with Korea, will also try to represent the voices of developing countries that are not members of the group.

He said that he and ambassadors to Korea from the G-20 member countries have had several meetings at the National Assembly to talk about the agenda for the June summit in Canada and the November summit in Seoul.

“I understand that we will talk about exit strategies during the summit in Canada, if things go smoothly,” he said. “And in Korea, we will talk more about mid-term policy and long-term strategy.”

“I also want to say that the summit should address non-financial issues that are important to the international community,” he said. “Food security, energy security, water security and climate change are some of the topics that should also be addressed.”

Indonesia’s top priorities are forestry and climate change, he said.

“We were lucky” he said, emphasizing that the country has learned from past crises.

Along with reinforced banking and financial regulations, the government also launched stimulus measures and created jobs with infrastructure development programs, he said.

“We also have a very strong domestic market,” Dammen said. “If we cannot export our products, then we can consume them, thanks to our more than 200 million population.”

Dammen also expressed hope for the future of the bilateral relationship between Korea and Indonesia.

“Indonesia is very rich in natural as well as human resources,” he said. “Korea has capital, skills, management, finance, funding and technology. We can complement each other,” he said. “This is a very important point that makes the prospect of our relationship extremely bright.”

Indonesia’s major exports to Korea include energy resources such as coal, oil and gas. Agricultural and textile products are also main export items to Korea, according to the ambassador.

Dammen said that political and security ties between Seoul and Jakarta have developed steadily since the two governments established diplomatic ties in 1944. And Korea’s support for Indonesia’s unity as one nation was greatly appreciated by his government, Dammen said, adding that Indonesia also supports unification of the two Koreas.

Noting that Indonesia has imported weapons systems from Korea, Dammen said he hopes to see deeper exchanges between the two countries in that field.

“We would like to see more military equipment and high-tech systems produced in Indonesia,” he said. “We don’t want to be just a buyer, but would like to become a partner for procurement projects with Korea.”

“Korea can use Indonesia’s workers and materials,” he said, stressing that such a method of cooperation will be more cost-effective and beneficial to both countries.

He also said Indonesia would like to see more investment from Korea.

There are about 3,000 Korean enterprises operating in Indonesia, the largest number for a single foreign country, Dammen said.

The Korean population in Indonesia is about 30,000, making it the largest foreign community in the country, he added.

“However, Korea is the seventh biggest investor in Indonesia,” he said. “In the future, we would like to see that increase to match Korea’s presence in our country.”

“About 28,000 Indonesian workers are in Korea, working in various industries ranging from manufacturing and construction to agriculture and shipping,” he said, adding that he would like to see more opportunities for Indonesian workers in Korea.

Commenting on the development of bilateral ties between the two nations, the ambassador stressed his government’s support for Korea as the host of the G-20 Summit in November. He said he was amazed to see the activities that have taken place in Korea since the decision to hold the summit here was made last year.

“You can see the whole community - schools, experts, lawmakers, the government and the preparatory committee - is focusing its attention on how to make this G-20 Summit a success,” he said. “That’s the beauty of Korea.”