Playful guides for the dead and the living alike

Playful guides for the dead and the living alike 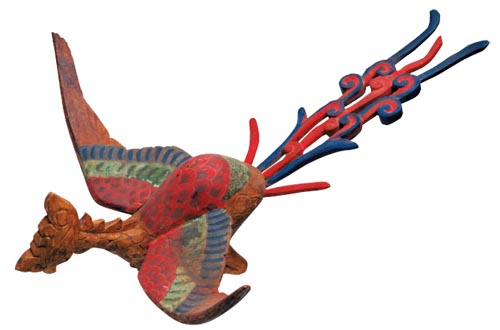 The traditional Asian firebird is said to lead the deceased to the afterlife.Provided by the museum

In most cultures, funerals are a solemn affair. Even if a rowdy party follows the ceremony, the casket or urn itself is almost always completely serious and respectful - certainly not the place for a little wooden man beating a drum, or doing a whimsical handstand, or for shyly smiling, bowing figures of women.

Yet who’s to say that if someone enjoyed acrobatics and music while alive, that he wouldn’t still be entertained by them in death?

That’s part of the spirit behind kokdu, the hand-carved wooden figurines once placed with the body at Korean funerals. Today, the tradition is almost completely lost, but there is one woman, Kim Ock-rang, director of the Dongsoong Art Center in Daehangno, out to ensure they’re never forgotten. Kim has collected some 20,000 kokdu since she started in the early 1970s. Late last month, she opened a museum to display her collection on the second floor of the art center.

Kim’s first encounter with kokdu took place almost 40 years ago. She was born to a rich family, and married Seung Sang-bae, an executive at Dongwha Holdings who died last year. She seemed to be the woman who had everything, but on the inside, Kim said, she was miserable.

“I was faced with an identity crisis,” Kim confessed. “My father passed away when I was 17 and I got married at the very young age of 20 to a man who was 31 years older with children older than me from his first wife, who had passed away.” 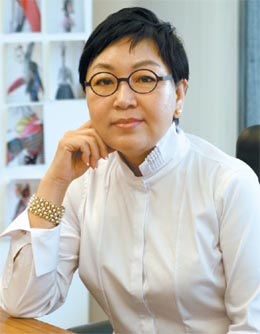 Kim Ock-rang, director of the Dongsoong Art Center, has been collecting kokdu figures since the 1970s and now has a total of 20,000.

Kim was a “loner,” as she puts it. “My husband was always busy with his business, and I couldn’t meet up with my friends that often after I was married. And it was nearly impossible to hang around with the high-class wives of my husband’s friends,” she said.

That’s when she discovered an abandoned bag containing a small wooden figure in the neglected corner of a shop near the Cheonggye overpass in downtown Seoul. Instantly she felt a sense of kinship. “I felt I could relate to that kokdu, shaped like a woman wearing a red and green traditional robe, holding her hands in the air. We were both alone, and abandoned.”

Kokdu were commonly used in the Joseon Dynasty (1392-1910) to adorn the funeral biers that were used to transport coffins to ancestral burial grounds. Not just for the wealthy, kokdu were used for commoners, too. They were meant to provide the dead with guidance, security, care and entertainment on their journey to the beyond.

As Korea modernized rapidly, the custom slowly disappeared, and some kokdu were even thrown out.

“Now my kokdu are in a warm and safe place, under dazzling lights,” Kim said. “I promised to provide them with care and shelter as they did for me.”

This kokdu appears to be playing the role of an acrobat. Provided by the museum

The kokdu designed as guides are usually animals or mythical creatures that lead the soul to the afterlife. The guardian kokdu feature more detailed, fierce facial expressions and hold weapons such as spears to protect the soul from evil spirits.

The rows of women kokdu in Kim’s museum were given the role of caretaker, and feature exquisitely detailed clothing and hairstyles.

The entertainers are designed to console the dead and distract mourners from their grief. Despite their function as mortuary art, they feature friendly expressions, some even dressed up as clowns.

Firebird and dragon figures would be attached to the sides of the bier, and would be more intricately carved than their human-shaped companions. The firebirds were meant to lead the deceased through the air, while the dragons helped the soul brave obstacles in the sky and under the water. 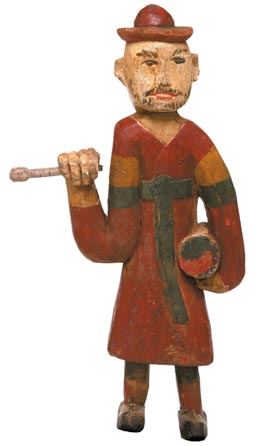 Some kokdu are designed to “entertain” the dead with musical instruments. Provided by the museum Other female kokdu, below, assume the role of caretaker. [YONHAP]

It isn’t just the appearance or history of kokdu that appeal to Kim. She said she’s drawn to them on a spiritual level. “People have no interest in things that are abandoned. This also applies to human beings,” Kim said.

Kokdu once gave solace in their place next to a body the spirit had abandoned, but today they’ve fallen by the wayside themselves. But to pay back the small figures for the comfort they gave her, Kim has been fighting for years to preserve this part of local history. In 1984, she created a puppet show with kokdu, and two years later published a quarterly magazine called “Kokdu Geuk,” or “Kokdu Theater.”

In 1991, Kim established the Ockrang Cultural Foundation to bring attention to talented people who hadn’t yet been able to get the attention of the wider artistic world. “My passion for kokdu and Kokdu Theater led me to theater in general. What the kokdu had taught me was that theater could bring tradition back into our lives,” Kim explained.

Using her resources and ability to spot treasures in the rough, Kim aspires to support the future leaders of Korean culture. “I discover young yet undeveloped talent, provide them with various opportunities and show them I believe in them.” 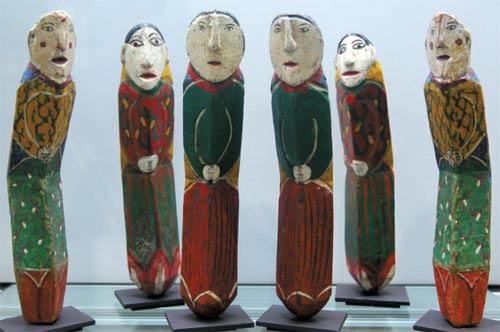 Kim explained that once she is gone, it will be the job of the next generation to spread Korean culture, including keeping local traditions like kokdu alive. But Kim doesn’t want to preserve traditions in a stiff, unchanging form. Her foundation’s efforts are instead directed toward ways to support more creative and innovative forms of artistic expression - those neglected by the government and large corporations’ patronage programs.

But despite her wide range of cultural activities over the past 30 years, Kim will always have a special place in her heart for kokdu, and she’s still working on spreading awareness of them domestically and overseas.

“We need to build up the brand power of kokdu and appeal to the public in the form of a cartoon or even a product. They need to return to people’s lives,” Kim argued. She is now preparing for an exhibition including artistic installations. “When it’s completed, people will be able to meet kokdu using all their five senses, and form a more intimate relationship than they have now by just watching them through glass cases.”

The Dongsoong Art Center also includes an Experience Hall, which provides visitors with the chance to touch kokdu, and performances about the figures are also being held on the fifth floor of the center.