A great performance, to the end

A great performance, to the end 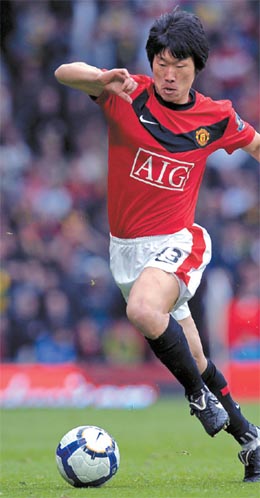 Manchester United’s Park Ji-Sung in action against Stoke City on May 9. [AFP/YONHAP]

It was a beautiful goal, a diving header of Ryan Giggs’ corner kick in the 84th minute, and it brought Park Ji-sung his fourth score of the season and his third league goal.

But it brought him no joy.

“I already knew about Chelsea’s win. It didn’t matter how many goals we scored, we did not have a shot at winning the league title so there was no need to celebrate,” the Manchester United winger said in a postgame interview.

Manchester’s 4-0 win yesterday against Stoke City, its last game of the season, wasn’t enough to secure the team’s fourth consecutive league title. It narrowly missed out on the honor, ending with a record of 27 wins, four draws and seven losses. But that wasn’t enough to match up to Chelsea, which brought the season to a close with the league best-record: 27 wins, five draws and six losses.

Still, there was some consolation. “We lost out on a chance to make history by earning four consecutive league titles,” Park said, “but I think it was great that we did not give up hope until the very end of the season.”

He can also take pride in his own performance. Park struggled with various injuries throughout the year, and did not receive as much playing time as he had last season; Park played in 17 league matches, and tournament play brought his total appearances to 26. Nonetheless, the left winger tallied four goals, three of them against the likes of Arsenal, Liverpool and AC Milan, and one assist. Park also delivered big in key matches with his signature hyperactive style of play, covering a lot of ground on both ends of the pitch.

Some media outlets have reported a possible transfer to Bayern Munich or Moscow next season, but Park said he didn’t know anything about it.

“I found out through the media. I have nothing to say about such speculation,” he said. “I will focus on preparing for the World Cup and then work to prepare for next season. It was only recently that I recovered fully from injuries.

“It’s great that I scored a goal before joining the national team.”

The national team gathered for training camp yesterday at noon and Park and the Bolton Wanderers’ Lee Chung-yong are set to join today.

Like Park, Lee ended his English Premier League season on a high note. Coming off his rookie season in the EPL, Lee was the team’s most valuable player, one of “The Top Three,” best transfer, and he was chosen as the best player by his peers.

“Bolton is my first overseas experience and coming off my first season in Europe, it’s great to have received such awards. My teammates and staff were a huge help and I am truly thankful,” said Lee. “The MVP honor is great but it means a lot to be recognized by my peers.”

After the transfer from FC Seoul in August of last year, Lee made an immediate impact for Bolton, appearing in 40 matches and registering five goals and eight assists. Though Bolton faced the possibility of relegation for much of the season, it managed to finish 14th out of 20 teams with a record of 10 wins, nine draws and 19 losses.

“We went through some tough times this season but we were able to pull together as a team,” Lee said.