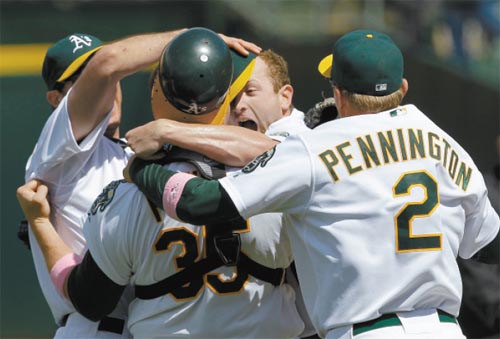 Oakland A’s pitcher Dallas Braden, center, is mobbed by teammates after throwing a perfect game against the Tampa Bay Rays on May 9. [AP/YONHAP]

Braden pitched the 19th perfect game in major league history on Sunday, shutting down the majors’ hottest team and leading the Oakland Athletics to a 4-0 victory over the Tampa Bay Rays.

Braden threw his arms in the air after Gabe Kapler grounded out to shortstop for the final out, his simmering feud with Yankees star Alex Rodriguez merely a footnote to the first perfect game for Oakland in 42 years.

The closest the Rays got to a hit was Jason Bartlett’s liner to third leading off the game. Evan Longoria tried to bunt leading off the fifth, drawing boos from the small crowd.

“Pretty cool,” Braden said. “I don’t know what to think about it just yet. There’s definitely a select group. I’d like to have a career more than today.”

Before this gem, Braden was best known for his enraged reaction to Rodriguez walking across the mound on April 22. Still angry after the game, he told the slugger “to go do laps in the bullpen” if he wanted to traipse across a mound.

The squabble was still simmering last week. On Friday in Boston, Rodriguez said he didn’t want to extend Braden’s “extra 15 minutes of fame.”

“I’ve learned in my career that it’s always better to be remembered for some of the good things you do on the field, and good for him,” Rodriguez said before facing Boston. “He threw a perfect game. And, even better, he beat the Rays.”

That said, Braden’s grandmother may have gotten the last word: “Let’s forget it, uh huh? And stick it, A-Rod,” said a chuckling Peggy Lindsey, who was in the stands watching.

This was the majors’ first perfect game since Mark Buehrle did it for the White Sox against the Rays on July 23 last year, and the second no-hitter this season after Colorado’s Ubaldo Jimenez threw one in Atlanta on April 17.

“I’m a bad omen. That’s the third perfect game and fourth no-hitter I’ve been on the wrong side of,” Rays manager Joe Maddon said.

“When Kenny Rogers threw his I was the bullpen coach. If you want to see another one, just follow me around.”

Braden pitched the A’s first perfect game since Hall of Famer Jim “Catfish” Hunter’s gem on May 8, 1968, against the Minnesota Twins. Only 6,298 were there to witness it. Sunday’s crowd at the Coliseum wasn’t much better: 12,228.

Braden (4-2) wasn’t fazed by anything, locating his fastball in every spot, throwing two-strike changeups and getting quick outs against a Rays team that lost on the road for just the third time this year.

He struck out six in the improbable 109-pitch performance, throwing 77 strikes in his 53rd career start and first complete game.

Braden’s teammates mobbed him when the Mother’s Day masterpiece was over, leaving bats and gloves scattered on the field. The left-hander pointed to the sky in honor of his single mom, Jodie Atwood, who died of skin cancer when he was a high school senior. He shared a long and tearful hug with Lindsey, who helped raise him, in front of the dugout.

“It hasn’t been a joyous day for me in a while,” Braden said. “With my grandma in the stands, it makes it a lot better.”

Braden’s perfect game was the sixth no-hitter in Oakland history. The 26-year-old Braden, a native of nearby Stockton, was a 24th-round draft pick by the A’s in 2004. He improved his career record to 18-23.

“Little League, I got a couple of them under my belt,” Braden said. “In the bullpen, I’m damn near perfect every day.”

His grandmother gets the game ball, the Stockton Hall of Fame everything else. Dozens of supporters from Stockton packed the Coliseum’s Section 209 - the number of their area code.

Last Mother’s Day, Braden was hit by a line drive by Vernon Wells.

“You know, a year later you don’t expect anything like this,” he said. “I’m just happy to be putting on the costume a year later.”