Triple-double brings Celts even in playoffs

Triple-double brings Celts even in playoffs 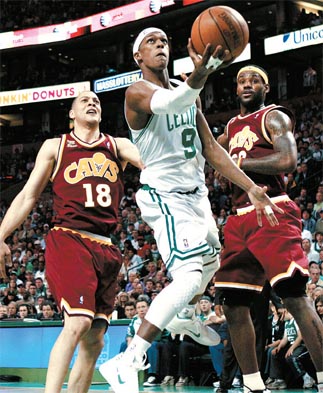 Rajon Rondo led the charge, matching his best playoff scoring performance with a career-high in rebounds.

BOSTON - Rajon Rondo notched the fourth postseason triple-double of his career Sunday to lead the Boston Celtics to a 97-87 victory over the Cleveland Cavaliers that leveled their NBA Eastern Conference playoff series.

Rondo had 29 points, 18 rebounds and 13 assists as the Celtics knotted the best-of-seven series at two games apiece.

His rebounds were a playoff career high and he matched his best playoff scoring performance.

With some of his teammates in foul trouble, Rondo played 47 minutes and fans gleefully chanted “MVP” as he sank a brace of free throws with 17 seconds remaining.

Ray Allen and Kevin Garnett scored 18 points each for Boston, who bounced back from their worst playoff defeat in club history.

They insured they will have at least one more home game in the series, which returns to Cleveland for game five on Tuesday.

Cavs superstar LeBron James scored 22 points. That was just one more than he had in the first quarter of Cleveland’s game-three blowout win.

Shaquille O’Neal chipped in 17 points, his high for these playoffs, but was on the bench when Boston took control in the final period.

The Celtics reeled off the first 10 points of the fourth quarter to parlay a two-point lead into an 84-72 advantage.

Cleveland didn’t score in the period until Mo Williams’ jumper with 7:15 left, and their own 10-0 run in the fourth could only briefly get them close.

Steve Nash scored 20 points, despite playing with his right eye swollen shut after taking an inadvertent elbow from Tim Duncan in the third quarter.

Amare Stoudemire led the Suns with 29 points as Phoenix closed out the series in four games and beat the Spurs in the playoffs for the first time in five attempts.

Phoenix will now have a chance to rest before opening the conference finals against either reigning NBA champions Los Angeles or Utah. The Lakers hold a commanding 3-0 lead in their series and would try to close out a sweep of their own in game four last night.

Nash, who looked like he needed a boxing cut man more than a basketball physiotherapist, scored 10 of his 20 points in the fourth quarter to help scotch a Spurs rally.

Nash’s injury recalled the 2007 Western Conference semifinals, when his nose was gashed when he collided with Tony Parker in game one.

That time the Suns ended by losing the series, but Nash wasn’t going to let that happen again.

“I’ve lost to these guys a lot and we had a great opportunity,” Nash said. “You don’t get many cracks like this. I just wanted to give what I could for my teammates.”

Parker led the Spurs with 22 points, but San Antonio couldn’t avoid being swept for the first time since 2001.

George Hill had 17 points, and was fouled while hitting a three-pointer with 26.5 seconds left. He converted the four-point play to close the gap to two points and give San Antonio a glimmer of hope.

However, Manu Ginobili then missed a three-pointer and San Antonio’s hopes expired for good.