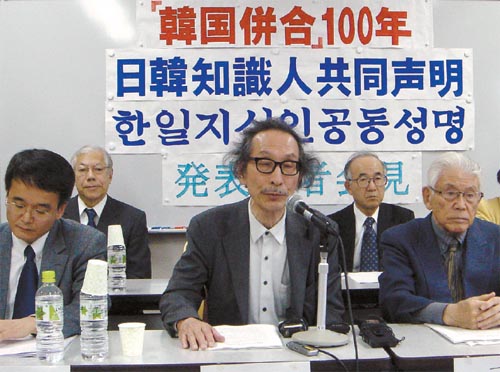 Haruki Wada, a professor emeritus at the University of Tokyo, releases the joint declaration that states that Japan’s annexation of Korea 100 years ago was null and void. A group of 105 Japanese and 109 Korean intellectuals endorsed the four-page statement, which defined the annexation as “unjust and illegal.” By Park So-young


Academics, writers and attorneys from Korea and Japan yesterday issued a joint declaration in their respective capital cities saying that Japan’s annexation of Korea 100 years ago was null and void.

The group of 105 Japanese and 109 Koreans released their four-page statement, which called the annexation an “act of imperialism realized through military force that pushed away all protests, including one staged by the Emperor of Korea.” The statement also defined the annexation as “unjust and illegal.”

“The preamble of the [annexation] treaty was all false, as was the entire text of the treaty,” the statement read. “There were major flaws to the process leading up to signing of the treaty, and also to the format of the treaty.”

The intellectuals’ statement defied the Japanese government’s interpretation of the 1910 annexation treaty.

The Treaty of Basic Relations between the two countries, reached in 1965, notes that “all treaties or agreements concluded between the Empire of Japan and the Empire of Korea on or before Aug. 22, 1910, are already null and void.”

But Japan has continued to argue that the annexation treaty was valid because the two sides signed it on an equal footing. 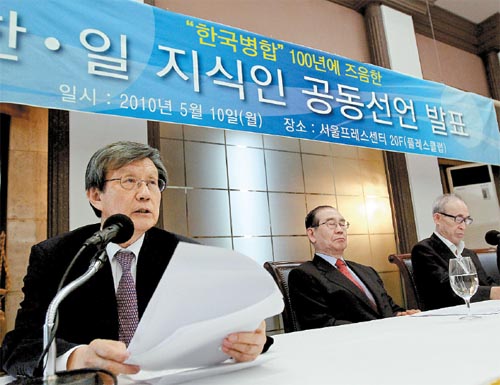 Korea has countered that the treaty was a legacy of Japan’s aggressive imperialism and was null and void from its inception.

“At the 100th anniversary of the annexation, we share these common views of history,” the statement read. “Based on the shared ideas, we should be able to address many historical problems between Korea and Japan. Further steps must be taken for reconciliation.”

The intellectuals also urged their respective governments to issue a joint statement to address the validity of the annexation treaty.

The intellectuals said compensation for these women has not been addressed, and they also urged the Japanese government to compensate forced laborers and soldiers.

Work on the statement began last December. Participating scholars said they went through five different drafts before they agreed to the final version, and some wording provoked heated arguments from both sides.

“Putting in the word ‘illegal’ was one of the most challenging processes,” said Kim Young-ho, president of Yuhan College in Korea. “I understand our Japanese counterparts tried hard to keep it in the statement.”

Hiroshi Miyajima, a professor at the University of Tokyo who attended the press conference in Seoul, said he felt Japan “had to do something” in the 100th year since annexation.

“Japan should view its own modern history with more objectivity and face up to its mistakes,” Miyajima said.