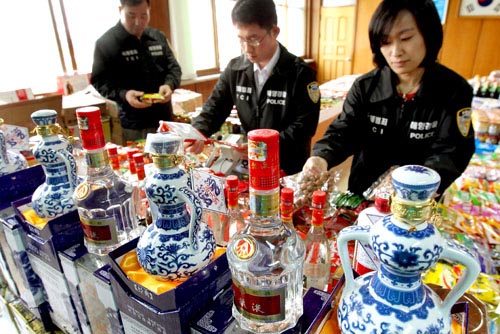 Incheon Coast Guard officers yesterday stand in front of Chinese food and drinks worth an estimated 300 million won ($266,190) that were illegally smuggled and sold in the Korean market. Incheon police said two people, including a man surnamed Jang, 50, are being questioned on charges of illegally importing and selling Chinese food here. Police said the two set up a store in Bundang District, Seongnam, Gyeonggi, in 2006, and have been selling Chinese cigarettes and food such as beef tendons, silkworm chrysalises, nuts and alcohol. Some of the products bore labels that falsely identified their country of origin, and had already passed their expiration dates. [YONHAP]