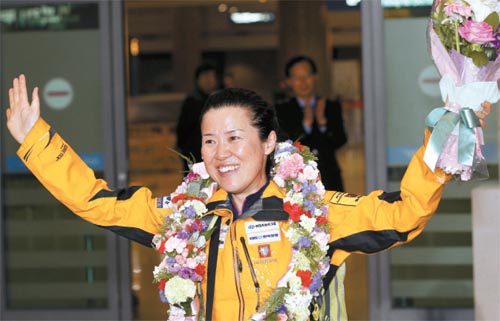 Oh Eun-sun waves to the crowd as she comes through the arrival gate at Incheon International Airport yesterday. By Oh Jong-taek

After the frigid heights of Annapurna, mountaineer Oh Eun-sun got a warm welcome in the lower altitudes of Korea yesterday.

And at a press conference at Incheon International Airport, she spoke at length about the questions surrounding her feat in the Himalayas.

The 44-year-old climber was on top of the world on April 27, when her summit of Annapurna made her the first woman in the world to scale all 14 eight-thousanders, or mountains over 8,000 meters (26,247 feet) above sea level.

But her claim to glory was quickly disputed by rival Edurne Pasaban of Spain, who cast doubt about whether Oh had reached the top of Kangchenjunga in 2009.

“I met with Elizabeth Hawley on two occasions and also explained my ascent up Kangchenjunga to Reinhold Messner by drawing diagrams,” said Oh. “Messner approved of my explanations and I also cleared everything with Hawley using photographs as proof.”

Messner is a fabled Italian mountaineer who was the first to scale all 14 eight-thousanders, and Hawley maintains the Himalayan Database, which for decades has kept records of all climbs in the Himalayas. While not officially recognized, the group’s rulings are more respected by climbers than certificates issued by the Nepalese government.

Hawley had downgraded Oh’s status on Kangchenjunga to “disputed” after interviewing Pasaban last month, and while that status will remain unchanged until Pasaban withdraws her challenge, Oh said her explanations gained Hawley’s approval. The American record-keeper will reportedly interview Pasaban one last time this month.

While others in climbing circles have criticized Oh’s use of supplemental oxygen and Sherpa guides on her expeditions, Pasaban, who is in the process of scaling her final eight-thousander, Shishapangma, has been the most vocal. The Spanish climber questioned the photo provided to prove Oh’s ascent of Kangchenjunga, claiming that a rock seen in the photo does not exist at the mountain’s peak. Oh has responded that she reached the top, but bad weather kept her from taking pictures at the summit.

“I was with Pasaban at the Annapurna base camp and she didn’t bring up the issue then,” Oh said. “I didn’t think it was fair for her to talk about this behind my back when we had the chance to discuss it face-to-face.”

“There have been some who have been critical of my methods but I think there is a misunderstanding,” said Oh. “The use of supplemental oxygen or Sherpas has been criticized, but famous mountaineer Reinhold Messner says that they’re a matter of individual choice, and should not be the cause of controversy. I think the same way.

“Messner stated he trusts me 120 percent and also congratulated me on becoming the first ever to climb a total of eight summits in the span of 15 months,” said Oh.

Oh’s feat received heavy coverage in the Korean media, but some critics here have also frowned upon how quickly she conquered eight Himalayan summits.

“In a recent interview with a German weekly, Der Spiegel, I was congratulated for achieving an improbable feat. It’s a little disappointing to hear criticism in Korea,” Oh said.