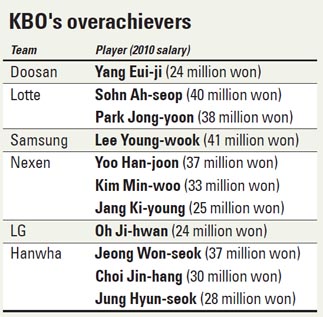 You get what you pay for, the adage says, but sometimes you get a bargain. This season, a number of Korea Baseball Organization players are giving far more than they receive - and that’s brought several of the overachievers who earn only 20 million to 40 million won ($17,680 to $35,360) to the cusp of stardom.

Yang returned from his mandatory military service and immediately secured the starting catcher job. In his first game as starting catcher against the Nexen Heroes on March 30, the 23-year-old displayed power at the plate by hammering two home runs. He hit 13 home runs in the minors last season and with six so far this year, he’s leading the team ahead of notable names such as Kim Dong-ju and Kim Hyun-soo.

Samsung’s Lee Young-wook is in only his third year in the KBO, but as he’s batting .320 with an on-base percentage of .416 and 11 steals, he’s earned the trust of his manager, Seon Dong-ryeol. “Lee has been great for us in the leadoff spot,” said Seon.

Then there’s Sohn Ah-seop, who hit .186 last season but has bounced back to .350 this year, for third best in the league. Sohn is leading in scored runs with 33, and is also tops in the league in hits with 48.

Lotte’s Park Jong-yoon has been a serviceable backup to Lee Dae-ho at first base, with .280 and three home runs. LG’s starting shortstop, Oh Ji-hwan, has 17 RBI, the third-most on his team.

The two teams benefiting the most from young, affordable players on the rise are the Hanwha Eagles and Nexen Heroes. The cash-strapped Heroes traded away several of their star players in exchange for prospects and cash. The Eagles lost their two star players, Kim Tae-kyun and Lee Bum-ho, to Nippon Professional Baseball via free agency.

The void Lee Taek-geun left in the Nexen outfield has been filled by Yoo Han-joon and Jang Ki-young. Yoo, who completed his military service in March, has four home runs and team-best 22 RBI so far. Jang hasn’t seen as much playing time as Yoo, but he’s hitting .342.

Jung Won-seok was released by Doosan last season but has found a home in Hanwha. As the starting second baseman, Jung is hitting .310. He is the only Hanwha player averaging better than .300.