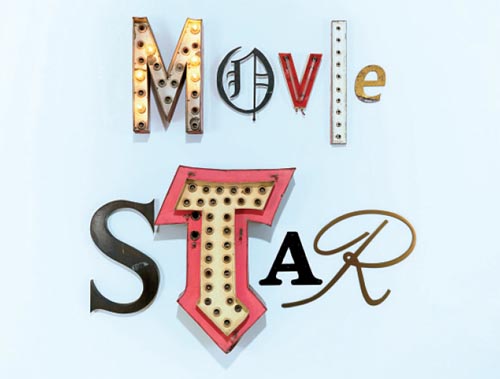 Jack Pierson makes sculptures with letters from signboards that were thrown out onto the street, telling a story while expressing something about his own internal narrative.

Pierson is a versatile artist who works in photography, video and sculpture. He has gained recognition for his work through numerous exhibitions, most recently at Kunst-Station St. Peter in Cologne, Germany.

He is currently holding his first solo exhibition in Korea, titled “Jack Pierson: Night” at the Kukje Gallery in Sogyeok-dong, central Seoul.

The exhibition displays the latest in Pierson’s “Word Sculpture” series. “Consisting of salvaged letters that he picked up from Las Vegas casinos, old movie marquees and other exhausted businesses, his word sculptures form an individual word or phrase that seem to hint at tales of faded glamour, nostalgia for impetuous romance and a rash pursuit of stardom,” according to the gallery’s Web site.

“Whilst the color and motifs in the works powerfully recall the American culture and the American dreams of fame and fortune in their reference to once dazzling road-side signs, the individual letters are now in a state of decay and Pierson’s works are marked with disillusionment, ultimately expressing an autobiographical narrative of his own unfulfilled journeys and sentiments of disappointment,” the Web site said.

Pierson began collecting letters in the 1990s, eventually turning them into works that the viewer is free to interpret.

“From 1984 to 1990 my studio in New York was on 42nd street, which was run down and represented the old New York,” Pierson said at a press conference in Seoul on May 4. “At that time, the street was going through a revival so a lot of letters were being thrown out.”

But relying on found letters has its limitations and some pieces have taken longer to assemble.

That’s what happened with the artist’s latest piece, “Desperate?”

Pierson said he came across the one-word question on a bridge he used to cross. The sign had been placed there to deter people from jumping. He knew that he wanted to create a sculpture of the sign and he even had all of the letters. The one thing he was missing was the question mark, and he didn’t add it to the work until he found one.

This shows that the existence of each letter has an enormous impact on his work, since he draws upon his collection of found letters rather than creating the letters himself.

When asked if he ever worried that he might run out of materials, Pierson said, “Oh, you should see, I have this big room filled with letters. And now is a good time to get them because everything is going digital.”

*The exhibition runs through June 6 at the Kukje Gallery, in Sogyeok-dong, central Seoul. For more information, call (02) 735-8449 or visit www.kukjegallery.com.