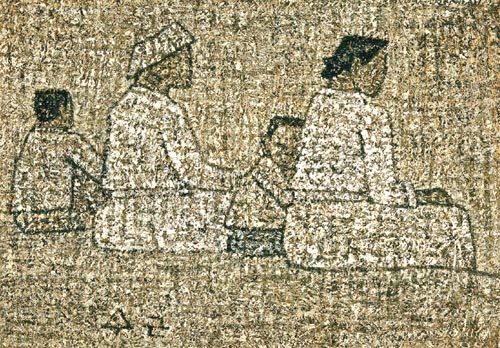 The scene at Gallery Hyundai on Samcheong-dong street in central Seoul last Friday was somewhat different from usual. The gallery’s exhibition rooms, which usually accommodate art connoisseurs, were crowded with visitors ranging from children to senior citizens. It was the first day of the retrospective of Park Soo-keun (1914-1965) who is one of Korea’s most beloved artists. The exhibition, which commemorates the 45th year since the artist’s death, shows 45 oil paintings by Park along with photos and other documents about him. It is a rare large-scale retrospective of the artist, who left only about 300 oil paintings in total.

“I am familiar with his works because I saw them in textbooks in my school days. But I’ve never had a chance to see them in person,” a female gallery visitor in her 20s said.

Park Myung-ja, founder of Gallery Hyundai, said it was difficult to persuade the collectors to lend them to the gallery for the exhibition.

“The individual collectors who loaned us the paintings for this exhibition asked us again and again to return them safely, because if there were an accident they wouldn’t want the insurance money, even if it were more than the estimated prices of the paintings,” Park told the press before the opening. “That’s why it would be difficult to mount such a large-scale exhibition of Park’s work again,” she said. 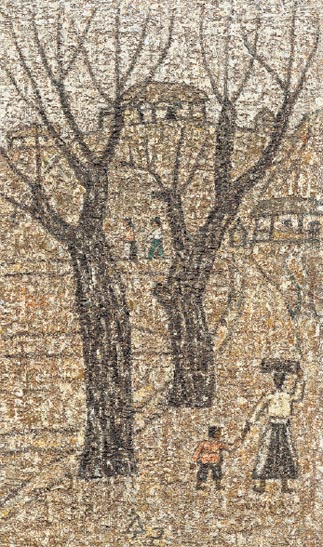 “On the Road” (1964) by Park Soo-keun. Oil on hardboard Provided by Gallery Hyundai

Although Park’s works are valued now, he had difficulty selling his works during his life.

Kim Young-na, professor of art history at Seoul National University, wrote in an essay that most of Park’s contemporaries in the 1950s and ‘60s focused on emulating Western masters such as Pablo Picasso and Henri Matisse, as were the small group of local collectors in Korea at the time. That was the cause of Park’s financial difficulties and partly explains why most of his paintings are small in size, Kim said.

Despite the indifference of the Korean art world, Park continued to go his way, depicting the everyday life of ordinary Korean people in paintings. The colors of these works remind viewers of soil and stones, and the unique texture he developed has the feel of granite, the main material used for traditional Korean stone art.

That texture is one reason why he did not leave many works behind. To create the texture, he applied heavy layers of oil paint again and again on each painting, a time intensive endeavor. According to the gallery, Park said, “Our ancient stone works such as the pagodas and statues of Buddha are a source of exquisite beauty that cannot be described by words. I am inspired by this beauty.”

“Park is perhaps the first artist since modern art took root in Korea to seriously explore the lives of common people in his paintings,” Kim said. “His paintings deal truthfully with one of the most painful periods in Korean history, capturing both the despondent reality of the time and the way people endured their fate with patience and an honest heart.” 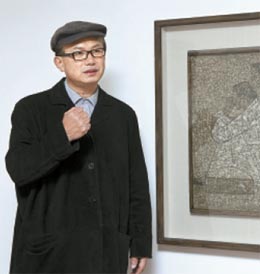 Park Soo-keun’s son, Sung-nam, who is also a painter, talks about his father’s work. Provided by Gallery Hyundai

Many of his paintings depict women selling goods in the market and doing other work, showing that women were forced to work outside the home to support their families in the aftermath of the Korean War (1950-53). His color tones and use of trees without leaves, familiar elements of his works, are gloomy but there is a deeply human quality to the paintings as well.

“Before we attempt to categorize his work into a particular style and movement of Western art, we should remember that Park was an artist who was not keen on the trends that were in vogue, but a solitary artist who pursued his own artistic vocabulary,” You Hong-june, professor of art history at Myongji University, wrote in an essay.

Among those who recognized Park’s work during his lifetime was an American, Margaret G. Miller. She came to Korea with her husband for business in the 1950s and continued to buy his works even after she returned to the U.S. She also introduced Park to U.S. galleries and magazines.

Despite his financial difficulties, Park tried to be a good father, painting illustrations of Korean traditional fairy tales for his children, said Park Sung-nam, who is one of Park’s sons and also an artist.

“My father repeatedly said he had a very ordinary philosophy on art - that an artist should paint the goodness and truthfulness in people,” Park Sung-nam said. “My father’s paintings represent the spirit of Korean people. I want more foreign people to know him to understand this country.”

He may soon get his wish. An English-language book on the painter is now available for sale at the gallery.

*The exhibition runs until May 30. The gallery is open from 10 a.m. to 6 p.m. Tuesdays to Sundays and closed on Mondays. Admission is 5,000 won ($4.40). For more information visit www.galleryhyundai.com.