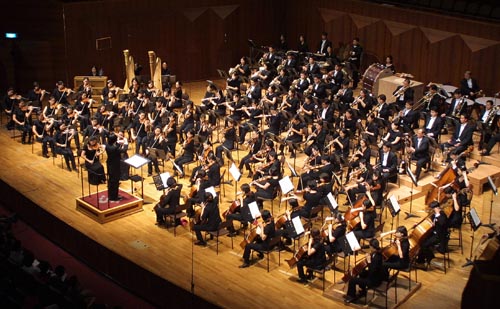 Tomorrow: Seoul Metropolitan Chorus is holding its 118th regular concert with a performance of Carmina Burana, the cantata by German composer Carl Orff.

The music will be sung by the Seoul Metropolitan Chorus and Gwangju City Choir, with the accompaniment of the Korean Symphony Orchestra. For the first time, the dance element will be performed by a group of B-boys.

Carmina Burana brought its composer Orff to the ranks of world-class musicians. Contrary to its magnificent and beautiful melody, the lyrics are humorous, satirical and secular.

Tomorrow: Legendary jazz saxophonist Kenny G will be coming to Seoul as part of his Rhythm and Romance Tour.

Having sold more than 75 million records in his 30-year career, Kenny G is regarded as the best-selling instrumental musician in the modern era. In 2008, the Grammy Award-winning musician released his “Rhythm and Romance” CD, a collection of romantic Latin music featuring both original and classic love songs.

Friday: The British jazz-pop duo Matt Bianco is visiting Seoul for the first time as part of this month’s Seoul Jazz Festival. Popular during the mid-1980s, the band has produced 11 CDs including last year’s “Hi-fi Bossanova.”

THE GREAT SINGERS IN KOREA

May 21 to 22: The popular R&B group, Brown Eyed Soul, is holding a series of concerts titled “Soul Breeze.”

Often called Korea’s Westlife, the band has come out with several hit songs, one of which remained at the top of the KBS chart for much of October 2003.

Friday to Saturday: The Seoul Metropolitan Traditional Music Orchestra presents this special concert aimed at helping the general public better understand the spirit behind traditional Korean music. The concert will feature a modified flute, a first in a traditional Korean concert, according to concert organizers.

Friday to May 22: Set in the 1950s during the Korean War (1950-53), Dalle’s Story illustrates the earnest attempts of a family to overcome all kinds of hardships. Traditional Korean music, elaborate sets and a uniquely vivid combination of human performers and puppets make for an exciting performance that will appeal to both children and their parents.

May 26: Each year the National Changgeuk Company of Korea seeks talented young singers to fulfill its mission to preserve and transmit the art of pansori singing.

These singers, selected by audition, will show off their skills with highlights from the five best-known pansori stories.

May 28 to June 1: Having captured the limelight with performances in Vancouver and at New York’s Lincoln Center, the National Dance Company of Korea’s “Dance Chunhyang” will now be presented to fans in Korea. Based on the classic “Tale of Chunhyang,” which tells how the everlasting love between Chunhyang and Mongnyong transcends barriers of social class, the production portrays their love story through dance, from their first meeting to their separation.

The story is based on Voltaire’s tragedy, “Semiramis,” which in turn was based on the legend of Semiramis of Babylon. Semiramide was Rossini’s final Italian opera, and represented a return to the vocal traditions of his youth, a melodrama in which he recreated the baroque tradition of decorative singing with unparalleled skill.

Sunday to May 20: Christoph Willibald Gluck’s opera “Orfeo ed Euridice” will be performed with a Korean cast. This opera is based on the myth of Orpheus. It belongs to the genre of azione teatrale, meaning an opera on a mythological subject with choruses and dancing. The opera is Gluck’s most popular.

To May 23: This annual musical theater festival brings together singers and actors from across Korea and abroad to perform 10 plays in three venues.

Festival highlights include “Shadow Orchestra,” a combination of magic, mime, music and physical theater. French magician Xavier Mortimer will give the performance on Friday and Saturday at Uijeongbu Art Center’s Small Theater.

Next week, the Shanghai Dramatic Arts Center will present “The Legend of the White Snake,” also at the Uijeongbu Art Center’s Small Theater. The performance tells the story of a forbidden romance between a man and a benevolent white snake sorceress. Traditional Chinese paintings are “drawn” on the set during the performance, adding a mystical aura to the dramatic play.

Today to Sunday: Now in its 30th year, this festival will screen over 80 films from Korea and abroad. The festival is divided into two parts, the international competition and international invitation sections.

Tickets to screenings vary and the opening ceremony costs 10,000 won.

From Seoul, take a train or bus to Busan.

Take a bus headed for Chuncheon from the Express Bus Terminal, line No. 3 or 7.