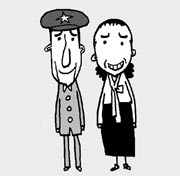 “Adam and Eve were the first communists in human history. They had no clothes to wear and nothing to eat other than an apple, nor did they have a house to live in. Nevertheless, they believed that they were living in paradise.”

This is a joke ridiculing old Soviet society.

In fact, Nikita Khrushchev, the supreme leader of the Soviet Union in the 1950s, often alluded to the possibility that the ideals of communism were revealed in the Holy Bible. The difference, he said, is that paradise is not given by God but built by the work of human beings. He also said that the Soviet Union would lead the rest of the world to paradise.

However, the centralized economy of the Soviet Union, which was supposed to pave the way for utopia, was unstable from the start. Things got so bad that Joseph Stalin, the iron-fisted ruler, was forced to go abroad to get foreign currency. He ordered Soviet authorities to sell the vast collection of the State Hermitage Museum in St. Petersburg in secret and at dumping prices.

Paradoxically, it was an American banker, Andrew W. Mellon, who bought the largest portion of the collection. He paid over $6.6 million for the purchase of 21 paintings, including works by Rembrandt and Raphael. According to Paul Johnson, the author of “Modern Times,” the amount was equivalent to one-third of the Soviet Union’s exports to the United States at that time.

Western intellectuals could not have known that the Soviet situation was so bad. Several of them were deceived by the florid propaganda the Soviet Union used to hide its domestic problems. When Julian Huxley, a British biologist, visited the Soviet Union in 1932, at the height of a famine he praised Stalin, saying that “Stalin had given the people a prosperity that would not have been possible 10 years ago.” He was visiting a restaurant for foreigners. George Bernard Shaw, an Irish playwright, praised the “comfort” of the Soviet labor camps, saying that once people entered the camp, no one wanted to leave.

However, propaganda cannot deceive everyone forever. With communism, the illusion of paradise was eventually shattered by economic difficulties that would not go away. Most Communist countries, starting with the Soviet Union, have discarded the political ideology. In fact, the only country still clinging to the obsolete myth of communism is North Korea.

The situation in North Korea is reflected in the recent actions of its leader. The reason why North Korean leader Kim Jong-il had to travel thousands of miles to China, in spite of his age, lies there. At the summit with China, he set his honor aside and asked for economic assistance. Once again, he has let the whole world know that there is no paradise in his land. I would like to ask the North Korean leaders who visited China when they are going to wake up from their futile dream.