GNP to drop its Jeju candidate

GNP to drop its Jeju candidate 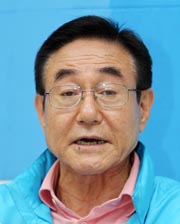 Less than a month before the June 2 regional elections, the Grand National Party announced yesterday that it plans to deprive the party’s pick for the governor of Jeju Island, Hyun Myung-kwan, of his candidacy after his sister was arrested for allegedly bribing voters to support him.

Last Friday, Hyun’s sister, 58, was charged with violating election laws when she was allegedly found in a hotel coffee shop in Seogwipo, Jeju, meeting voters holding checks worth a total of 25 million won ($22,013). Upon discovery, she tried to swallow the checks, according to Jeju police.

The ruling party said that it will not nominate a replacement for Hyun for the upcoming regional elections, and that a final decision on the matter will be announced today by the party’s supreme committee. If Hyun is deprived of his candidacy, it will be the first time ever that the ruling party has not fielded a candidate in the Jeju regional elections.

Hyun, the former chairman of Samsung C&T, was the No. 1 ranking candidate in Jeju in a public poll.

“Although [the election law violation charge] doesn’t directly involve the candidate, Hyun, we feel that because the case involves his sister, the party has a moral responsibility,” said Choung Byoung-gug, the GNP’s secretary general and head of the nomination screening committee, yesterday during a press conference at the National Assembly.

Hyun said that he will voluntarily resign the GNP candidacy. “I humbly accept the party’s decision,” he said yesterday. “Before faulting my sister, I feel a responsibility as a candidate that this sort of event played out.”

Hyun is expected to hold a press conference today at 11 a.m. to reveal his future plans, and many election experts say that it’s likely that Hyun will run independently of any party.

Also yesterday, Hyun’s other sister, 63, filed a defamation suit against a supporter of a rival candidate. In her suit filed with the Jeju police, the sister said Kim, 49, hired people to follow her and her sister around and filmed them to make it look as though they were committing a crime. Kim’s employees then handed the footage to a local media source, the suit claims.

The film allegedly shows the older sister in front of Hyun Myung-kwan’s house holding an envelope and handing it to the driver of a waiting car. The lawsuit says Kim commissioned the film so that the candidate he is supporting, Woo Keun-min, former governor of Jeju, will be elected instead of her brother.

The suit claims, “Kim hired people to follow us and film everything we did from early May to May 7, and handed the content over to a media source in the [Jeju] province and forced them to broadcast it to make it appear as if I were involved in a criminal act.” Police said she is suing Kim for illegal filming, investigation, invasion of privacy and defamation, but they did not report the amount of damages sought.

On a morning talk show yesterday, Park Jie-won, the newly elected floor leader of the main opposition Democratic Party, commented that the GNP hasn’t managed to stem corruption within its own ranks and compared Hyun’s alleged actions in “designating his sister to give 25 million won in bribes” to those of a spy. Park said that Hyun should resign his candidacy.