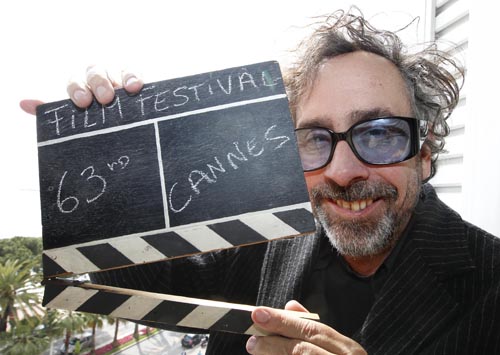 Director Tim Burton, Jury president of the 63rd Cannes Film Festival, holds a film clapper in Cannes May 11, 2010. The Cannes film festival, the world’s biggest, runs from May 12 to 23. [REUTERS]


CANNES - Action-packed adventure “Robin Hood” got the 2010 Cannes film festival under way on Wednesday (local time), kicking off 11 days of movie mayhem on the French Riviera.

A-listers Russell Crowe and Cate Blanchett, who play Robin and Marion respectively in Ridley Scott’s re-working of the English legend, were on the red carpet for the opening evening gala.

The Hollywood blockbuster is, however, one of relatively few U.S. titles at this year’s festival, reflecting a tough economic climate that has starved Cannes of some of its star power and provides an unsettling backdrop to the celebration of cinema.

“Maybe the main reason is the [financial] crisis, because cinema is an industry ... which needs a lot of money,” festival director Thierry Fremaux told Reuters in Cannes.

“As we all know, everywhere in the world money is not something very easy to find and especially to make a film with. But I think also it’s a coincidence. Maybe next year we will have three, four, five American films.”

The sole U.S. title in the all-male, 19-strong competition is Doug Liman’s “Fair Game” starring Naomi Watts as Valerie Plame, the CIA agent whose cover was blown in 2003, and Sean Penn as her husband, Joseph Wilson.

Oliver Stone and Woody Allen bring their latest films to the prestigious movie showcase but outside the competition.

Asian cinema features strongly in Cannes, which prides itself on promoting new talent and championing low-budget productions by obscure directors from around the world.

Asia is represented by films from Thailand, Japan, China and two from South Korea - Lee Chang-dong’s “Poetry” and Im Sang-soo’s “The Housemaid.”

“When Korea came out in the festival years ago, we didn’t know if it was one shot or really a long trend and now we can say that Korea, or Asia but especially Korea, is a very strong country for cinema,” said Fremaux.

Giant posters advertising films and fashion were going up along the Croisette waterfront, hotels were filled with thousands of stars, journalists and executives heading to town and gleaming yachts were ready for hire in the harbour.

Stone’s “Wall Street: Money Never Sleeps,” in which Michael Douglas reprises his 1987 role as ruthless corporate raider Gordon Gekko, will be among the most topical at the festival, focusing on corruption and greed at the world’s biggest banks.

Allen’s latest offering is “You Will Meet a Tall Dark Stranger,” and Mick Jagger of the Rolling Stones is expected to appear for the documentary “Stones in Exile” about the recording of the band’s seminal album “Exile on Main Street.”

Among the most eagerly anticipated titles are Fair Game and “Burnt by the Sun 2,” the sequel to Nikita Mikhalkov’s picture about the terror of Stalinist repression.

Critics are generally excited by the 2010 lineup, although they wonder if it can live up to the buzz of last year which featured the acclaimed “The White Ribbon,” “A Prophet” and “Up,” and Lars Von Trier’s controversial, ultra-violent “Antichrist.”