Why Korea should go soft

Why Korea should go soft 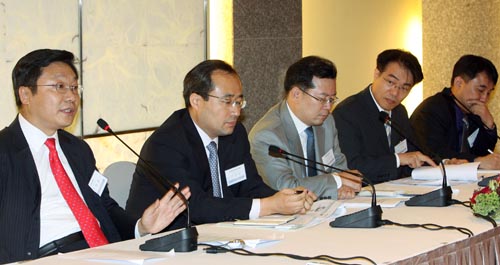 A joint government and civilian conference on finding ways to bolster Korea’s soft power is held in Seoul in late 2008. By Kim Seong-ryong

In a recent survey of the G-20 nations, the Hansun Foundation (a Seoul-based think tank) ranked South Korea as 13th in the world in terms of national power - defined as the ability to obtain what a country wants in international affairs. It ranked Korea 9th in hard-power resources (military and economic capabilities), but 12th in soft power. In the words of one newspaper:

“State-of-the-art factories, high-tech weapons and an advanced information communications infrastructure are the key components that a country must have for a stronger international competitiveness. However, for these ‘hard power’ ingredients to become true engines to propel the country’s growth and prosperity, they must be backed by more sophisticated and highly efficient ‘soft power’ that runs the hardware. Unfortunately, Korea is relatively weak in soft power.”

The Wisemen Roundtable on Soft Power in Northeast Asia, convened by the Korea Foundation, the East Asia Institute and Joongang Ilbo in February 2008, reached a similar conclusion. In short, there seems broad consensus, both global and domestic, that Korea must pay greater heed to soft power if it is to play a more prominent role in international affairs.

Power is the ability to make others act in a way that advances the outcomes you want. That can happen in three main ways: threats of coercion (“sticks”); inducements or payments (“carrots”); and attraction, which makes others want what you want (“soft power”). Soft power co-opts people rather than coerces them: if I can get you to want to do what I want, then I do not have to force you to do what I want.

In behavioral terms, soft power is attractive power. In terms of resources, soft power comprises the assets that produce such attraction. Some resources can produce both hard and soft power. For example, a strong economy can produce carrots that are used to pay others, as well as a model of success that attracts them.

In international politics, the resources that produce soft power arise in large part from the values an organization or country expresses in its culture, in its example, and in the way it deals with others. A former French foreign minister, Hubert Vedrine, who served from 1997 to 2002, observed that the United States is powerful because it can inspire the dreams and desires of others. The United States is a master of global images through film and television; this, in part, draws large numbers of overseas students, who either stay in the United States or bring their experience back home with them.

The soft power of any country rests primarily on three resources: (1) the attractiveness of its culture; (2) its political values, when it lives up to them at home and abroad; and (3) its foreign policies, when they are seen as legitimate and having moral authority.

Sometimes, these dimensions can conflict. For example, the attractiveness of the United States declined markedly after the invasion of Iraq, which was seen as illegitimate in the eyes of many nations. In contrast, after the United States used its navy to assist in tsunami relief in 2005, polls showed an impressive increase in its standing in Indonesia, the largest Muslim country in the world.

In China, President Hu Jintao told the 17th National Congress of the Communist Party in 2007 that the country needed to invest more in soft power to increase its standing in the world. A year later, it did just that with its successful staging of the 2008 Beijing Olympics. But China’s human rights policies and censorship of free speech has limited the growth of its soft power.

Korea, with a population of 48 million, is not big enough to be one of the world’s great powers. But many small and medium-sized countries wield outsized influence because of their adept use of soft power. Canada, the Netherlands and the Scandinavian states, for example, have political clout that is greater than their military and economic weight, because they have incorporated attractive causes such as economic aid or peacemaking into their definitions of their national interest. Korea should follow these examples.

Korea’s potential to wield greater soft power is impressive. In addition to its stunning economic success, this is a nation that has developed a truly democratic political system that values human rights, holds free elections and demonstrates a capacity for the peaceful transfer of power between different political parties. Korean democracy is less than tidy; bribery scandals are all too common and parliamentary fistfights are not unknown. Even so, the fact that Korea fights it out, sometimes literally, in the open is a point in its favor.

Then there is the attractiveness of Korean culture. The traditions of Korean art, crafts and cuisine have already spread around the world. The impressive success of the Korean diaspora in the United States has enhanced the attractiveness of the culture and country from which they came. Many Korean-Americans have risen to important positions, and this has created a positive view about their country of origin.

Korean popular culture has proved attractive across borders, particularly among young Asians. In short, Korea has the resources that produce soft power, and its soft power is not prisoner to its geographical or demographic limitations.

With such a strong base to start from, the question is: What can Korea do to enhance its soft power? Here are four possible strategies that can make this happen:

1) Attracting more foreign students to Korean universities would be one way to reinforce the country’s role in the emerging transnational youth culture. This would involve more emphasis on English and Korean language instruction, as well as scholarships for students from other countries.

2) Korea can increase its overseas development assistance to raise its profile on continents besides Asia. Many African countries are seeing increases in Chinese aid but worry about Chinese domination; they would welcome the diversification that Korean aid could provide.

3) Korea could sponsor more exhibits, visiting speakers and broadcasting to convey the story of its success. In 1960, Korea and Ghana had the same per capita income. Today Korea is not only a world-class economy, but also a democratic success story. The Korean government can help tell this story, but the credibility would be enhanced if companies, universities and nonprofit organizations joined in.

4) Korea can host major international conferences and events that draw attention to its successes. The fact that the G-20 will meet in Seoul is a good example, but an active program of sponsorship of nongovernmental events would help as well. Topics like health, development and climate change are issues that could draw positive attention to Korea.

South Korea has a message for the world. To tell it, though, it needs to see itself as more than a regional actor and think of the ways in which it can contribute to global public goods. This will enhance its standing - and in doing so, advance its foreign-policy interests.

*Joseph S. Nye Jr. is a professor of political science at Harvard University and former dean of Harvard’s Kennedy School of Government.