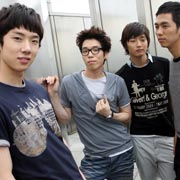 The only song by a Korean artist on the official 2010 South Africa World Cup album is set for release on May 18.

The album, “Listen Up! The Official 2010 FIFA World Cup Album™,” features Shakira, R. Kelly, Wyclef Jean, John Legend and more. It will be released on May 31.

The song from Korea is “No. 1” by popular boy band 2AM. It was written by Bang Si-hyuk, who has worked with 2AM in the past on such songs as “Even If I Die, I Can’t Send You Away.”

According to Sony Music Entertainment, “2AM has more than enough talent to work alongside renowned musicians. We sent a couple of demos by Korean singers to FIFA and 2AM was the one selected.”