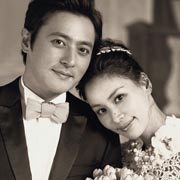 Celebrity couple Jang Dong-gun and Ko So-young, who returned from their honeymoon to Bali on May 8, could become parents earlier than expected.

According to an article in the newspaper Ilgan Sports on May 11, Ko is expected to give birth in mid-October, not in November as previously announced.

The newspaper reported that calculations of the November due date were based on a press release dated March 22 that was released by Jang’s management company, AM Entertainment. The press release said that Ko was in her third month of her pregnancy.

The newspaper says, however, that Ko is now about five months into the pregnancy and that both mother and fetus are healthy.

The couple was married on May 2 in Seoul.