Australian cricketers turn it around at tourney

Australian cricketers turn it around at tourney 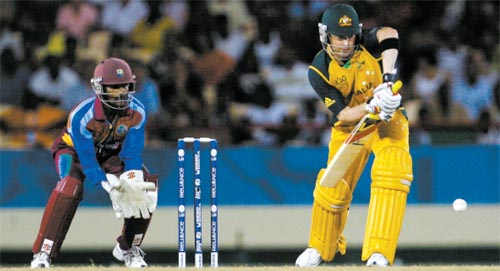 
GROS ISLET, Saint Lucia - Australia captain Michael Clarke said his side proved their critics back home wrong by reaching the semifinals of the World Twenty20.

But the batsman, whose in-form side face defending champions Pakistan here tomorrow, insisted reaching the last four wouldn’t satisfy either him or his teammates. Australia, following mediocre warm-up displays, including a defeat by Zimbabwe, have been the dominant side in the tournament proper.

They set the seal on their place in the knockout stages with a commanding six-wicket win over the West Indies at the Beausejour Stadium here on Tuesday, a result that ended the hosts’ participation in the tournament after they were skittled out for just 105.

It’s all a far cry from last year’s World Twenty20 in England, where the Australians were dumped out in three days after defeats by the West Indies and Sri Lanka.

“For the people at home who have doubted us in this form of the game, we’re thrilled to make it this far,” Clarke said.

Australia overpowered Pakistan by 34 runs in a first-round group match at Beausejour on May 2, piling up 191 on the back of opener Shane Watson’s 81 before strike quicks Shaun Tait and Dirk Nannes took six wickets between them. Asked if the result gave the team confidence, Clarke replied: “I think it definitely does.

“More to the fact the way we’re playing has given me a lot of confidence. We’ve come into this tournament ranked very low and [our] performances have been outstanding. That’s because of the desire from all the boys to perform, and we’ve done that consistently and in all different conditions.

Pakistan have been far less consistent but their spinners especially enjoyed themselves during an 11-run win over South Africa at Beausejour on Monday that helped secure their semifinal berth.

Clarke said, “Pakistan are very strong in any form of the game but especially Twenty20. They’ve shown that to obviously make the semifinals once again in this form of the competition.”

And Clarke says he expects the Beausejour pitch to do more for Pakistan than the livelier surface in Barbados, on which they lost to New Zealand by one run last weekend.

“We take momentum from every win we’ve had, going into Friday’s game. They’ll come out with a lot to prove on a wicket that suits them more than Barbados does.”

Pakistan have proved before that teams don’t need to be consistently good to win one-day tournaments, but Clarke rejected suggestions Australia peaked too soon.

“My goal was to get to our peak after the warm-up matches and that momentum would drag us through the tournament,” he said.

“It’s something we’ve all worked very hard over the last 12 months to try to achieve. Pakistan is a very strong team in this form of the game. They’ve got a lot of match-winners. It’s a big game for us.”