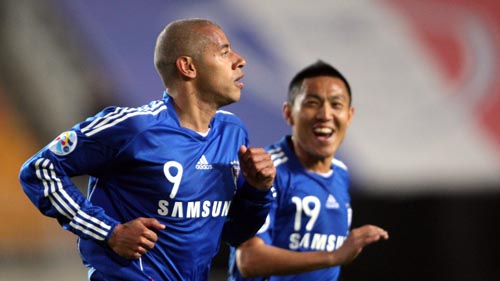 South Korea’s Suwon Bluewings and Seongnam Ilhwa stormed into the AFC Champions League football quarterfinals on Tuesday, ending China’s interest in the competition and leaving Japan’s hanging by a thread.

In-form Brazilian Jose Mota again hit the target for Suwon, bagging a brace, as they made the most of the home advantage to oust Chinese champions Beijing Guoan 2-0 in the one-leg round-of-16 match.

Mota was the tournament’s deadliest striker in the group stage with seven goals and he added another in the first half when he powered home a free header from a corner six yards out, leaving keeper Yang Zhi rooted to his line.

The hosts secured their place in the last eight with five minutes to go as some neat approach work found Yeom Ki-Hun, and his inch-perfect low cross was slid in at the back post by Mota. Yeom had injured his left foot during the East Asian Championships in February, and returned to action against Singapore’s Armed Forces on April 27. Yeom scored two goals in the match. In the match against Beijing, Yeom got off several shots and provided sharp passes for his teammates as he played a key role on Suwon’s offense.

“Yeom had a difficult time dealing with his injury and our team dearly missed his play,” said Suwon manager Cha Bum-kun. “He showcased his capabilities today. Having assisted on a key goal, Yeom can join the national team training with added confidence.”

In nearby Seongnam, Ilhwa, Korea’s most successful club with seven K-League titles, cruised past Japanese powerhouse Gamba Osaka 3-0 with all the goals coming in a devastating final 15 minutes.

Colombian international Mauricio Molina broke the deadlock in the 75th minute when he converted a penalty after being brought down. Substitute Song Ho-Young scored the decisive second with six minutes left after surging into the Gamba area before firing past helpless goalkeeper Yosuke Fujigaya.

Gamba, who won the tournament in 2008, were shell-shocked and Molina added to their misery with a third on 90 minutes, curling in a free-kick from the corner of the Gamba penalty area.

Suwon’s victory ended Chinese hopes of seeing a club in the last eight for the first time since 2006, while Japan now only has J-League champions Kashima Antlers left flying the flag.

They were scheduled to play defending champions Pohang Steelers, another Korean side, yesterday, while 2008 runners-up Adelaide United have the home advantage against the fourth Korean club still in contention, Jeonbuk Motors.

In the west zone, Saudi outfit Al Shabab prevailed 3-2 in a thriller with Iranian giants Esteghlal at the 63,000-capacity King Fahd International Stadium in Riyadh.

The seesaw battle was finally decided by super substitute Waleed Al Gizani. He settled the clash only minutes after his introduction as he headed into the Iranian net past goalkeeper Mohammad Mohammadi with just two minutes remaining.

Qatari champions Al Gharafa squeaked into the last eight with a penalty six minutes from time by Brazilian Araujo as they beat Uzbek heavyweights Pakhtakor 1-0 in Doha.

To be fair, the hosts were good value for the win, with several chances going begging. Araujo, having produced a wonderful piece of individual trickery beating three defenders, saw his shot saved early in the match. However, he was to make no mistake with his penalty after Ilhomjon Sumonov fouled George Kwesi in the 84th minute.