Old in years but not out of steam

Old in years but not out of steam 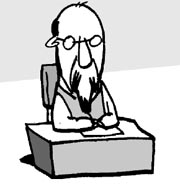 This is a passage found in a book on the people and geography of Jeju Island written by its governor, Lee Hyeong-sang, in 1704. It is also the first official record on the island’s centenarians that was written in a systematic way.

In another book, “Tamragyerokcho,” Governor Lee celebrated centenarians when he said: “In this country, a septuagenarian is already rare to find. And people say that octogenarians and nonagenarians bring blessings and fortune to the country. No doubt, the centenarian is very special.”

This shows the author considered centenarians to be marvelous people who had reached the limit of the human lifespan.

As a matter of fact, there is no difference between the East and the West in that both East and West once used 100 years of age to symbolize “the limit of human life.”

In the Book of Isaiah, there is a passage that says that those who die after reaching 100 will be children and those who die before then are doomed.

And the “Myeongsim Bogam,” a book written to teach ethics to children in the 14th-century Joseon Dynasty (1392-1910), says: “Although there is no one who can live over 100 years of age, there are still people who draw up millenary plans,” implying that humans cannot live more than 100 years.

I think this passage should be revised because we are now living in a world where people worry about a “centenarian phenomenon.”

Thanks to the development of medical science and improvements in our diet, the number of centenarians is increasing rapidly.

According to the census carried out by the National Statistical Office in 2005, the number of centenarians in Korea was 961, an increase of 3 percent over that in 2000.

Peter Schwartz, a futurist, predicts that the human lifespan will one day extend to 140.

A while back, a centenarian oriental-medicine doctor, whose medical license was canceled while he was managing a medical clinic in Seoul, won a court case that saw his license renewed, overturning the lower court’s earlier decision to suspend his practice of oriental medicine in Seoul.

It is really amazing that he not only continued to work until such a late age, but that he also had the energy to go through a legal battle to defend his medical license.

Human beings who are middle-aged and in the prime of their lives, and feel discouraged about their impending retirement, should brace themselves and try to follow the lead of the energetic oriental-medicine doctor who has beat the odds and lived beyond 100 years of age.