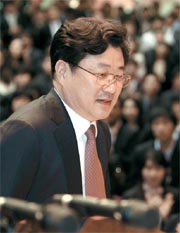 “Regarding the issue of plummeting public faith in the prosecution, it won’t be a solution to split the authority and power [of the prosecution] and give it to others, or place on a new power above it,” Kim said in a special lecture yesterday at the Judicial Research and Training Institute. “It would be more desirable to allow the people to keep a check on the current authority and its powers.”

Kim was responding to proposals to reform the prosecution system, including one from the Blue House. The Lee Myung-bak administration has announced a plan to appoint a pan-governmental task force to reform the law enforcement authorities. The team was to include the justice minister, the home minister and the senior presidential secretary for legal affairs.

The ruling Grand National Party has also pushed for the establishment of a special team to investigate corruption among senior public servants or a permanent independent counsel system.

Kim’s proposal about inviting the public to keep the prosecution in check appears to hint at a plan to modify the current system, in which prosecutors alone have the power to indict. Kim may be referring to U.S.-style grand juries or Japan’s prosecution review commission.

Kim also made clear his commitment to voluntary reform of the system. “Since I took office, the prosecution has transformed, but it is time for it to be reborn,” Kim said.

A clamor to reform the justice system follows a Busan-based builder’s claim that he bought favors from dozens of active and retired prosecutors with gifts, meals, cash and sex worker services for more than two decades. After MBC’s “PD Diary” aired a feature on the construction company owner, a special committee was formed with two prosecutors and seven outside experts to investigate his claims.

In the fallout from the scandal, Park Ki-joon resigned as chief of the Busan District Prosecutors’ Office. More accusations against him were made yesterday.

“We are seriously investigating whether Park had an intention to cover up,” said Ha Chang-woo, a Seoul-based attorney and the spokesman of the committee, said.