EXHIBITION IN A NEW SPACE 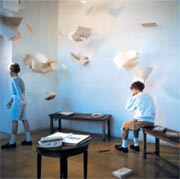 To May 23: Gallery K.O.N.G. is celebrating its move from Palpan-dong to Samcheong-dong with an exhibition of works created especially for the event by seven of their favorite artists. With this exhibition, the gallery is moving away from photography and into painting, sculpture, installation and video art.

French photographer Bernard Faucon is showing meter (3.28 feet) long pictures created on a ink jet printer. Kang Yi-yun, who had a solo exhibition at Gallery K.O.N.G. in 2009, is showing a video piece that blurs the lines between reality and fantasy. The exhibition also includes work by Kim Taek-sang, who specializes in monochrome art, and Chinese artist Chen Ruo Bing, who works in bright colors. 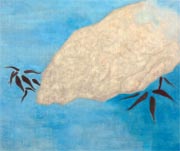 To May 26: Hwang Se-jun is an artist that gets his inspiration from the ordinary things around us. Whether it is the subway that we ride everyday or the flowers on the windowsill at the library, Hwang makes these seemingly mundane things the subjects of his paintings. In so doing, he tries to convey the simplicity of our surroundings while also directing viewers to look again at things they would normally pass by.

That idea is also reflected in the name of his exhibition. At first glance, the letters look like the English letters “O” and “H.” But after a second viewing, the letters seem to form the Korean word for love and lust, aeyok, a word that sounds like a moan when spoken, thus emphasizing the themes of love and lust in Hwang’s work.

For the artist, love and lust have always been wondrous, but are without resolution. His work focuses on the question of whether humans should avoid love and lust or embrace it.

THE EMERGING OF ONE THOUSAND YEARS

To May 26: Over 130 artists from North Jeolla have come together to commemorate the opening of the Jeonbuk Province Art Museum’s new gallery in Seoul.

The Jeonbuk Province Art Museum in Seoul was founded to raise awareness about and provide support to the art and artists of North Jeolla. It is situated within the Insa Art Center, which the museum thought was a perfect location given that the art center is a significant landmark in Insa-dong - a popular area for traditional Korean art in the capital city.

To June 5: In her second solo exhibition at I M Art Gallery, artist Lee Hye-seung expands her previous series, which featured scenes of islands and volcanoes. Photos from Japan, Taiwan, Ireland and Jeju Island inspired Lee for this exhibit and gave her a new sense of place.

She has spent much of her life traveling - going to college in Korea and studying abroad in Paris - but Lee says the photographs gave her a fresh idea of her own identity.

With her art works, Lee tries to present the true picture of landscapes and cityscapes, helping the audience understand the essence of each subject.