Lanterns and festivities for the enlightened one

Lanterns and festivities for the enlightened one

Since late last month, nighttime in downtown has been brighter and a lot more colorful. The pagoda-shaped lantern in front of City Hall is just the biggest - long rows of smaller lamps line the streets around Jongno and Gwanghwamun too.

Like the strings of colorful lights that signal Christmas is near, the start of the Lotus Lantern Festival today marks the advent of Buddha’s Birthday, on the eighth day of the fourth month of the lunar calendar, which falls on May 21 this year. The celebration continues until Sunday.

But don’t think that because your traditions don’t include the man under the pipal tree you can’t just enjoy the show.

“The Lotus Lantern Festival is a festival for everyone, regardless of religion or anything,” said Venerable Jaseung, president of the Jogye Order of Korean Buddhism. “With the lanterns symbolizing wisdom and compassion strung high above the streets of downtown Seoul, we enter a world that transcends skin color and religion, and the festival delivers a message of peace and equality.” 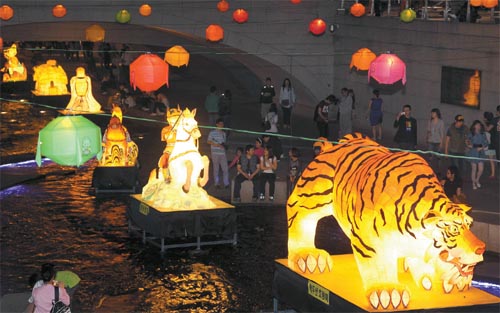 The custom dates back to the Goryeo Dynasty (918-1392), when it was called the “Lotus Lantern Assembly,” or Yeondeunghoe, and continued through to the Joseon Dynasty (1392-1910) in the form of the “Lantern Celebration,” or Gwandeung-nori.

The modern version of the festival was launched in 1996. It had more religious overtones at first, but has since grown into a party for Buddhists and non-Buddhists alike. Since 2000, it’s taken on a more international tone, drawing a significant number of foreign visitors out to experience a colorful Korean tradition.

A slew of events are scheduled for this year’s festival. 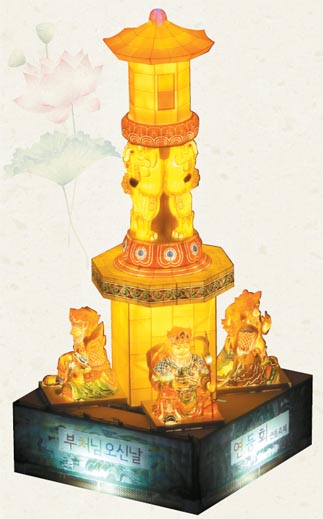 Today, Bongeun Temple in southern Seoul (Samseong Station, line No. 2, exit 6) kicks off an exhibition of traditional lanterns, which will run until May 23. The traditionally-crafted lanterns here are made from exquisite hanji, traditional Korean mulberry paper. A similar exhibition of hanji lanterns will be held in Gwanghwamun Park from May 17 to 23.

The next day, from noon to 7 p.m., the street in front of Jogye Temple will be transformed, with booths at which visitors can make their own lotus lanterns, experience Buddhist art, try temple food, see a variety of traditional performances and learn more about Buddhist cultures around the world. Meanwhile, monks and performers from Buddhist countries including Cambodia, Sri Lanka, Mongolia and Taiwan will show off their own unique traditions. 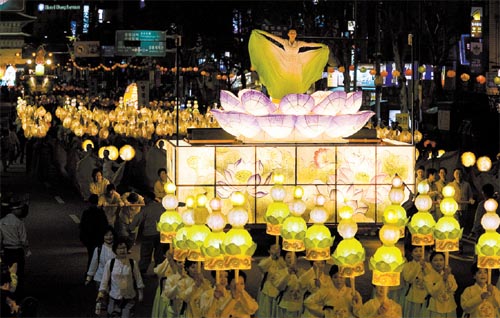 A huge parade of lotus lanterns like last year’s, above, will mark the climax of the festival on Sunday, while booths near Jogye Temple will give visitors the chance to make their own lotus lanterns, as the photo bottom, also from 2009, depicts. Provided by the organizer

The lotus lantern parade, the highlight of the festival, will start with a rally at 4:30 p.m. Sunday at Dongguk University Stadium. The parade, which features more than 100,000 handcrafted lanterns and about 100 giant lantern floats shaped like dragons, tigers, elephants and other animals, will march down Jongno to Jogye Temple at around 9:30 p.m. Afterward, a closing celebration will be held at Jonggak intersection in front of Bosingak Pavillion. 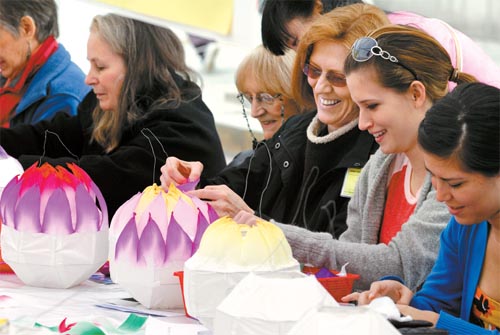