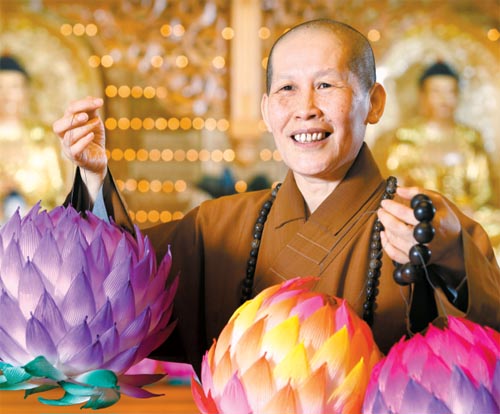 As Buddha’s Birthday draws near, temples across the country prepare for their biggest holiday of the year, and the Seoul branch of the Fo Guang Shan, a temple in Taiwan, is no exception.

“At other times of the year we have a handful of visitors, mostly Chinese living here and Koreans hoping to learn about Chinese and Taiwanese Buddhism and culture, but about 200 to 300 people visit us around the Buddha’s Birthday,” said the Venerable Yien, the head priest.

But there’s another reason Seoul Fo Guang Shan gets so busy on Buddha’s Birthday. The temple, which is one of few foreign branch temples in Seoul that hosts monks from another country, participates in the annual Lotus Lantern Festival as the Taiwanese delegation, displaying Taiwanese Buddhism and culture.

Fo Guang Shan, established by the Venerable Master Hsing Yun in 1967, is one of the most influential sects not only in Taiwan, but across the globe, with about 200 branch temples and an estimated 1 million followers worldwide.

The Venerable Yien, who studied at Dongguk University in Seoul in the late 1980s, has been the head priest of the Seoul branch since it opened in 1999. Currently, four Taiwanese Buddhist monks and nuns reside there.

The head priest said that while each Buddhist country has its own way of celebrating the birth of Buddha, Korea’s Lotus Lantern Festival is exceptional.

“The Lotus Lantern Festival is unique in that you can see various elements, including things that are traditional and modern as well as diverse Buddhist cultures and performances from other Buddhist countries, harmonizing with each other. It is like a comprehensive cultural festival where everyone becomes one,” she said.

“Korea’s Lotus Lantern Festival is marvelous, and I hear many Taiwanese Buddhist officials admiring and saying that we have to learn from it. It is surely a world-class event.”

The act of making a lotus lantern is also significant, Venerable Yien said.

“The lotus plant grows in the mud, but doesn’t lose its purity, and the lantern symbolizes the wisdom to brighten the world, which are the virtues we need to possess while living in this world,” she said.

“You will be able to do your own Buddhist painting, have a chance to write One Million Heart Sutras in the Buddha, and participate in tea ceremonies at the Taiwanese booth, which will be set up on the street in front of Jogye Temple, the main venue of the festival, on Sunday,” the Venerable Yien said.

*For more information on Seoul Fo Guang Shan Temple and its activities, call (02) 2276-0993 or visit the temple yourself. From Dongguk University Station, line No. 3, exit 2 walk to Taegeukdang, then turn left. The temple will be on your right.