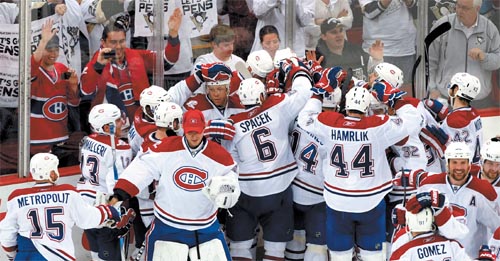 The Montreal Canadiens celebrate after beating the Pittsburgh Penguins 5-2 in game seven of the NHL Eastern Conference semifinals on May 12. The Canadiens advanced to the finals. [AP/YONHAP]


PITTSBURGH - The Montreal Canadiens followed up a monumental upset by pulling off another, and now the Pittsburgh Penguins are joining the Washington Capitals in sitting out the rest of the Stanley Cup playoffs.

Brian Gionta had two power-play goals, Mike Cammalleri scored his seventh goal of a series in which he upstaged Sidney Crosby and Evgeni Malkin and the Canadiens built a stunning four-goal lead before beating the Penguins 5-2 in game seven of the Eastern Conference semifinals Wednesday night.

Montreal, about the last team anyone would have picked to beat the top-seeded Capitals, much less the reigning NHL champion Penguins, accomplished what no team has done since the current playoffs format was adopted in 1994: Beat the Presidents’ Trophy winners and the Stanley Cup champions in successive rounds as an eighth-seeded team.

When it ended, the Canadiens crowded around goalie Jaroslav Halak, who made 37 saves in a performance not quite as dominating as that in Montreal’s 2-1 elimination win of Washington, but one that sent the Penguins home and shut down the NHL’s oldest arena.

As remarkable as the upset was - the Canadiens trailed 3-2 in the series before rallying to win the final two games - was the way they did it. They silenced the standing-room crowd of 17,132 in the last game at Mellon Arena by seizing a 1-0 lead with only 32 seconds gone after Crosby took a bad penalty on his first shift, then built it to 4-0 with barely 25 minutes gone.

Gionta scored on that Crosby-created power play, Dominic Moore made it 2-0 later in the period and Cammalleri scored his playoff-leading 12th goal at 3:32 of the second. The Penguins and their can-you-believe-it crowd almost couldn’t seem to fathom what was happening.

The tone was set when Crosby was called for driving Josh Gorges into the boards with 10 seconds gone. Pittsburgh took the bad penalties, made the wrong decisions and stood around as the other team skated past them.

When Travis Moen scored on a short-handed breakaway by skating past defenseman Sergei Gonchar, who offered no resistance, and wristing a shot past Marc-Andre Fleury, it was 4-0 with 14:46 remaining in the second, and it looked to be over. It was for Fleury, the game seven star of last year’s finals against Detroit, after giving up four goals on 13 shots. Brent Johnson replaced him.

The Penguins, their path to a third successive Stanley Cup seemingly made far easier when both second-seeded New Jersey and Washington were eliminated in the first round, had one last, now-or-never comeback left in them. It wasn’t enough.

Chris Kunitz and Jordan Staal beat Halak for goals later in the second period, and the lead didn’t look quite so secure.

The teams began the third period skating 4-on-3 for a minute, followed by a 50-second Penguins power play, and Crosby nearly got the Penguins within a goal, only to be denied by Halak only 25 seconds into the period. That might have been the biggest of Halak’s saves, as the Canadiens weathered that flurry and later made it 5-2 when Gionta got his second of the game, and seventh in the playoffs, with 10 minutes remaining.

Crosby and Malkin were handcuffed throughout the series by Montreal’s suffocating, turnover-forcing defense. Defenseman Hal Gill, injured for game six but back for game seven, was on the ice for nearly every Crosby shift, and the NHL’s regular season goal scoring co-leader managed only one goal in seven games. So did Malkin, even though Montreal played the final six games without its top defenseman, Andrei Markov (knee).

Instead, it was Cammalleri who was the unstoppable scorer, much like he was against Alex Ovechkin and the Capitals in the first round. He scored at least one goal in every game but game three and game four in Montreal, and almost every one was a critical one.

His final goal of the series must have thrilled the 20,000-plus who gathered in Montreal’s never-quiet Bell Centre to watch game seven on the big screens - an almost unheard-of sellout for a road game.

While these Penguins weren’t around then, their franchise knows what it’s like to lose a game seven at home in a huge upset. The Islanders ousted the two-time defending Stanley Cup champions in a second round series overtime Game 7 in 1993. And Florida pulled off a similar upset of a Mario Lemieux-led team by winning the 1996 Eastern Conference finals in Pittsburgh. Pittsburgh is (2-4) in home game sevens.