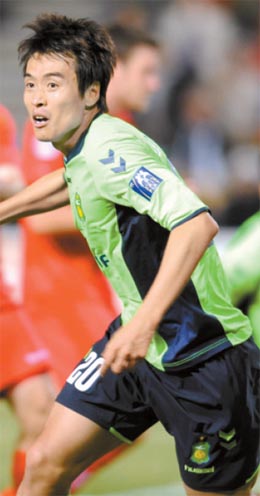 Brazilian striker Mota’s deflected right-foot shot in the 29th minute was enough for Pohang to dispose of the last Japanese team in contention. Kashima, the J-League champion, had topped its first-round group after six consecutive wins.

“We have a team that has a reputation for being able to achieve its goals but couldn’t do that, so it’s disappointing for us.”

Eninho scored once in each half, twice giving Jeonbuk Motors the lead at Adelaide United, but the visitors needed a late extra-time goal from Lee Dong-guk to win 3-2 later Wednesday.

That allowed Jeonbuk to join Pohang in the next round along with two other Korean clubs, Seongnam Ilhwa and Suwon Bluewings, which advanced on Tuesday night.

Eninho’s close-range shot gave Jeonbuk the lead in the 38th and, after Robbie Cornthwaite equalized, the Brazilian midfielder looked to have sealed the win with a right-foot drive from the top of the area in the 87th.

But Adelaide leveled it again five minutes into stoppage time when Serginho van Dijk stabbed in a left-footer from a sitting position following a goalmouth scramble from Cassio’s corner.

With a penalty shootout looming, Jeonbuk Lee moved into a floating cross at the far post and nodded in the winner with four minutes to go in extra time.

“The players were very tired and exhausted,” Jeonbuk coach Choi Kang-hee was quoted as saying. “I thought we would be going to penalties.

“I was thinking this is not our day ... the ball just won’t go in. Then to have him [Lee] score a header was a relief.”

Lee, who is competing for a spot on the Korean national team’s final 23-man roster for the World Cup, has been a clutch scorer this season.

Of the nine goals the veteran forward has scored so far, five of them have come with five minutes or less remaining in the game. Four of those goals were game-winning goals. Lee joins the national team training on a good note.

Also going through on Wednesday were Zobahan, which beat Mes Kerman 1-0 on Igor’s 84th-minute header in an all-Iranian match, and Saudi Arabia’s Al Hilal, a 3-0 winner over Uzbek giant Bunyodkor. Veteran defender Lee Young-pyo played the entire 90 minutes in the match.