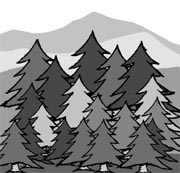 A poet from the Tang Dynasty (618-907) once wrote that a “sandstorm covered the sun.” Tales of the yellow dust storms that blow down from China and spread out over Asia every year date back that far. Today, even the boundaries of the storms’ influence have been blurred. Hong Kong, which was thought to be safe from the yellow dust, was recently blanketed with the stuff. The chalky debris regularly makes its way into the Korean Peninsula, out across the Korean Strait and on to Japan. According to Beijing’s state-run weather agency, the damage from the yellow dust this year will be the worst of its kind thus far.

The dust originates from three places in China - the southern parts of Xinjiang and Neimenggu (Inner Mongolia), as well as Gansu Province. Of China’s 27 provinces and autonomous regions, 21 provinces lie within a “damage zone” as the dusty cloud sweeps across the country. One-fifth of China is desert, and one-fifth of the population suffers the dust’s effects.

The person credited for exacerbating the dust problem should be Mao Zedong, who ordered trees cut down at random to get iron for arms, created terraced fields by leveling mountains and destroyed grassland to grow grain.

But the yellow dust is only a part of the environmental destruction going on in China. The entire country is overflowing with contaminated water and garbage.

To stop the desertification of China’s grasslands and slow the movement of the yellow dust, Premier Wen Jiabao recently announced the state’s “Green Policy Guidelines.” The guidelines, which will apply to all industries, stipulate that forestry and water resources be protected for the next 100 years. The Chinese government has also announced a plan to create windbreak forests and has established special task forces on renewable energy development and climate change.

Korean companies should take note of these changes. Above all, businesses that create contamination should either clean up or give up the idea of doing business in China. Even private companies will be subject to fines if they are found to be in violation of the new guidelines. And that could keep a lot of companies out of the Chinese market.

On the other hand, this could prove to be a golden opportunity for Korean companies that are prepared to deal with the new regulations. In the future, China plans to launch national environment-related projects, which could result in a 21st-century gold rush in that country. China is eager to encourage environment-friendly businesses such as solar batteries, and will certainly reduce the tax burden for such firms as an enticement. That is why Samsung Chairman Lee Kun-hee’s 10-year plan is worthy of attention. China is opening the door to a new market for Korean businesses that work to spin the yellow dust into gold.