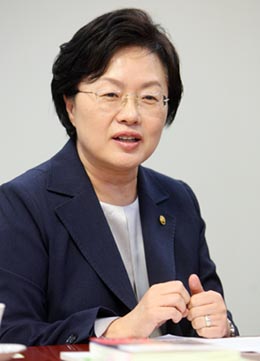 Strengthening Korea’s existing child care policies is on top of the list for the Ministry of Gender Equality and Family, according to Minister Paik Hee-young.

“Without sufficient child care policies, gender equality and families’ overall health will not be possible,” said Paik, during a one-on-one interview with the JoongAng Ilbo on Monday.

Although it is among the smallest of all government ministries, its role regarding birthrate, child care, jobs and sexual abuse is substantial.

“I don’t want to hear that [the Gender Ministry] is a quiet ministry. One of the biggest concerns for women is child care. I plan to push for policies dealing with various child care issues and multicultural family issues, including broadening the job sector for women,” the minister said, adding that as a former working mother she understands what women go through trying to balance work and family.

She cited recent data which found that only 15 percent of families with a child 1 year old or younger have access to child care facilities.

“If a child is too young and there isn’t any child care facility available, there is a strong possibility that the mother will quit her job. We want to support these women,” Paik said.

She said that last year, more than 100,000 women lost their jobs, and the reason most commonly cited was that they took time off from work for childbirth.

“It gets increasingly difficult for women to leave their jobs due to a child and come back to the workforce. This is why women are delaying marriage and childbirth,” she said.

“[A country] can’t expect to carry on in this industrial era just by forcing employees to work longer hours. I think it will be good if a large conglomerate set an example [for more flexible working hours],” she said.

Paik said that beginning next year, more families will be able to receive support from government-sponsored nanny services. At the moment, the government offers working families in the bottom 50 percent income bracket the opportunity to pay 27 percent of their total monthly earnings to hire a trained nanny for 11 hours a day, five days a week. By next year, Paik said that the service will be available to families in the lower 70 percent income bracket.

A “joint child care service” system, in which member parents take turns watching children, will also be implemented in around 230 cities and counties nationwide by next year, if pilot runs prove successful this year. Regional governments will provide the venue and a coordinator will be placed in each service center to iron out the schedule for parents.

Paik said the nanny service will cost around 4.4 billion won this year and rise to 15.4 billion won next year. Another 6.9 billion won will be needed for the joint child care service system, she added.

Even so, Paik said that these policies are a must “in a time when low birthrate is becoming a more serious problem each day.”

“We need to have government support that the public can actually feel directly influences their lives,” she said.

Paik also commented on the controversy earlier this year when a group of anti-abortion doctors reported fellow doctors for performing illegal abortions. She said she feels it is irresponsible for a country to force a woman to give birth.

“Prohibiting abortion shouldn’t be used as a tool to increase the birthrate,” she said.