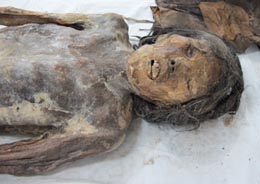 A mummy estimated to be about 500 years old was recently unearthed at a construction site on the outskirts of Seoul, a research institute said yesterday.

The 154-centimeter (5-foot) tall female mummy was discovered early last month at an industrial complex being built in Osan, some 55 kilometers south of Seoul, by a group of scholars and researchers from the Seokyeong Cultural Properties Research Institute.

Another mummy, presumed to be that of her husband, is also expected to be uncovered, as his tomb was found next to hers, they said.

The figure was found in a wooden coffin with a nameplate which indicates her husband’s position in the government. She is presumed to be a 16th century noblewoman who lived during the Joseon Dynasty (1392-1910), based on her garments and hairstyle, the researchers said.

She was wrapped in shrouds and buried with dresses and accessories, including a ceramic pot, a comb and hair pins.

“It’s very hard to discover a mummy dressed in perfect clothes and preserved in perfect condition like this,” said Kim Woo-rim, who led the excavation. “This mummy will help us study life during the early days of the Joseon Dynasty.”

Researchers said the noblewoman appears to have died of a chronic disease given her gaunt face and body, and “twisted lungs.”

In the early days of Joseon, it was customary to bury a nobleperson in an airtight coffin covered with plaster. As a result, the bodies are naturally mummified in a vacuum.

“In Korea, (a fair number of) mummies estimated to be from the Joseon era have been discovered. This is attributable to Joseon burial rituals,” said Jeon Sung-ho, a senior researcher at the institute.

Korean mummmies differ from Egyptian ones in that the internal organs remain inside the bodies, giving researchers an opportunity to conduct tests.