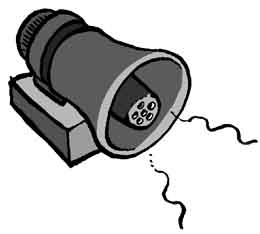 On Mount Yudal in Mokpo, South Jeolla, there is an opodae, a casemate with a cannon in it, that was set up in 1909. The cannon was once used when clocks were not commonplace to signal that it was noon.

It was a model devised during the reign of King Hyeonjong of the Joseon Dynasty (1392-1910). Gunpowder was loaded in the front of the cannon, and some 1.2 kilograms (2.6 pounds) of gunpowder were used for a single shot.

In Seoul, the cannon used to signal noon was fired on Geumcheon Bridge in Gyeongbok Palace. On April 1, 1908, the Japanese Resident General of Korea fired the cannon at noon Japan time, which was 11 a.m. Korea time, ignoring the one-hour time difference. That’s how 11 a.m. Korea time became noon.

Japan eventually took these cannons as supplies for war, replacing them with sirens.

During the war the sound of the siren became a warning for raids.

There are other examples of sirens in history, literature and the arts.

In his short story “Wings,” which was published in 1936 in the literary journal “Jogwang,” or “Morning Light,” the Korean writer Yi Sang wrote, “Should I go? Where should I go? Then the siren for noon went off.”

In the “Odyssey” by Homer, the Sirens were bird-women who lured sailors with their seductive music and then ate them. Odysseus wanted to hear their song, so he made his sailors put beeswax in their ears and asked them to tie him to the mast of his ship. In this way, the Greek hero escaped the deadly Sirens.

In big cities these days there are too many sirens. The sound of sirens from police cars, ambulances, fire engines and more is nearly constant. Sirens from car alarms go off all too often.

The siren was developed last year with the help of the departments of electronic engineering and computer science and engineering at Seoul National University. Different sirens are used for different cases because the evacuations are conducted in different ways. When a siren for a raid goes off, people know to seek shelter underground but when a siren for a disaster goes off they know they have to run to an empty site. When the earthquake siren goes off, it is a signal not to go underground.

But there are also sirens that do not make any sound. The Cheonan was one. It silently sent off an alarm about our national security situation.

The many different sirens exist for a purpose. We would do well to listen to what they are trying to tell us.