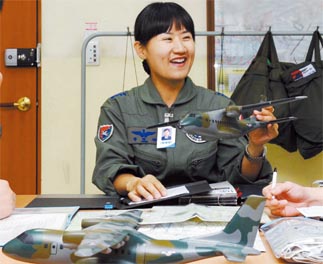 The Republic of Korea Air Force has produced its first female instructor pilot for a cargo aircraft.

Lieutenant Jang Se-jin was appointed as an instructor pilot for the CN-235, a medium-range twin-turbo-prop aircraft, on Tuesday. The 32-year-old lieutenant entered the Korea Air Force Academy in 1997, the first year in which women were admitted.

“I’d always wanted to become a police officer or join the military. I guess my dad, who was a police officer, had a huge influence on me,” Jang said during a telephone interview with the JoongAng Daily.

“The 49th graduating class of the Korea Air Force Academy is the first group with female members.

“When I was a high school senior, the Korea Air Force Academy opened up positions for women and since I’d always had an interest in joining the Air Force, I decided to enter the academy.”

Jang’s class had 20 female aviation cadets, all of whom were put through the same training regimen as the males.

“There were times when I felt like I’d reached my limit, both physically and mentally. However, I never wanted to give up my path,” said Jang.

“Since women’s physical rhythms are totally different from men’s, the Air Force had to go through a lot of trial and error before it was able to set up a proper system for female cadets,” she explained.

“I had to give up a lot of my female identity when I decided to join the Air Force. I already knew how hard it would be and what I would have to go through to become a member of the Air Force.”

Jang met her husband, a fighter pilot, when she was an aviation cadet at the Air Force Academy. They are well known as the Air Force’s first married pilots.

The couple has a 26-month-old son, but because of their busy schedules, Jang’s mother-in-law does most of the day-care duties.

“I live with my son and mother-in-law. My mother-in-law and her husband live separately so that she can take care of my son,” said Jang, sounding apologetic.

Jang and her husband also live apart, as he must stay near his work in Daegu, so the family is only able to be together on weekends.

“To foster one instructor pilot takes a huge amount of money and a long period of time,” says Jang - more than 12 billion won ($11 million), and a minimum of 500 flying hours over eight or nine years. And she’s keenly aware of the honor that implies.

“Because I was given special care and treatment in order to become an instructor pilot, I owe it to younger generations who want to be like me to pass that on to them,” she said.