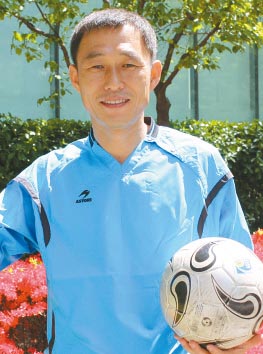 A lone missionary who once made a living playing with a soccer ball, Kang Sung-min now finds himself tasked with transforming a group of untrained indigenous kids in a tropical nation into a competent football team.

As fictional as it may sound, it is a real-life situation for the 47-year-old former freestyle footballer who encountered the Moken, a traditionally nomadic Austronesian ethnic group settled near the border of Thailand and Myanmar, last year.

“There was no field, the kids had no shoes, there was no coach and ages were all mixed, ranging from 8 to 15,” Kang recalled of his first impression of the children in an interview with Yonhap News Agency on Friday.

In the 1980s and early ’90s, Kang was a star in freestyle football, an expressive art form combining various body tricks using a football.

His performances included one at the 1988 Seoul Olympics, and he won a sponsorship from Dunhill and spent two years in Paris, holding shows during Paris Saint-Germain FC games.

As his religious faith deepened, he traveled to Thailand in 1993 for a one-time exhibition event with a professional South Korean football club.

He returned to Thailand in 1995, and since then has created a league of 100 football teams, called the Immanuel League, with children from 100 different churches. The league holds regular games and has a football camp every April.

Two of his players advanced to Thailand’s national team.

After Kang established his 99th team, a fellow missionary talked him into meeting the Moken.

Forming teams and training young footballers was nothing new to him, but in the case of the Moken, it was a different story.

“That was one of the regions hit hard by the 2004 tsunami that devoured Southeast Asia. I was told that the kids, who didn’t even have shoes, loved football. So I was introduced to train the kids and form my 100th youth football team.”

Kang’s journey - from teaching basic skills to the team of 20 Moken children to coaching them in a regional tournament - was recently captured in the documentary film “Calling 2: Moken World Cup.”

The Moken team reached the second round, only to be beaten by a fully trained and equipped local school team. Their performance was well-received by the crowd, however, considering they played barefoot and had never seen a grass field, Kang said.

“I’ve never seen kids who were that happy when dribbling a football. The Moken had no nationality or even birth dates, but the children could achieve their dreams through football,” he said.

Fellow missionaries have also asked him to build a football team with children of the Karen, another tribe living near the border of Thailand and Myanmar, many of them in refugee camps.

“My goal is to form a total of 200 football teams by 2020 and raise great football leaders and athletes to lead the Thai football scene,” Kang said.

He is also hoping to build a 17-million-square meter football center in the city of Korat, where children from all parts of Thailand can receive more systematic football training.