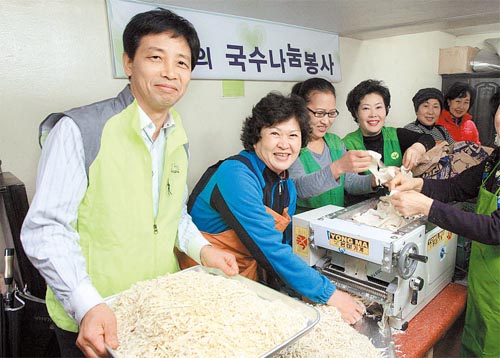 Kim Hyuk, left, leader of the Noodle Donation Team, and members of the Bun 1-dong Saemaeul Woman’s Society smile as they make noodle dough in their apartment facory. Every month, the donation team delivers noodles to 5,000 people in low-income families. By Kim Kyung-bin

The sign posted on the door of an apartment in Jugong 5-danji, Bun 1-dong, Gangbuk, Seoul, reads “Noodle Donation Team.” Once the door is pushed open, the buzzing sound of a machine fills the hall. In a workroom clouded with flying particles of flour, seven members of the Bun 1-dong Saemaeul Woman’s Society push leftover dumpling skins into the machine, their hands white with flour. In response, the noodle machine promptly spits out a flat sheet of dough.

While carefully rolling noodles with her fingers, Park Hee-ja said that leftover dumpling skins must be put through the machine about five times and kneaded again to create chewy noodles. The noodles are then left to rise for a day before they are taken to elderly people who cannot easily move around on their own, she said.

On the day we visited, April 30, the women’s society made enough noodles for 250 people.

Bae Yeong-ae, another team member, said that when they deliver the noodles, the recipients clasp their hands and thank them in such a heartfelt manner that they cannot imagine stopping their charity work.

The Noodle Donation Team currently delivers noodles to about 5,000 people in lower-income families in 10 neighborhoods in the Gangbuk area every month.

The Bun 1-dong Saemaeul Woman’s Society is just one of 25 charity groups working in the apartment noodle factory, which is called Herb, that opened two years ago. They stop by the factory about once a month to make the noodles.

The Noodle Donation Team Team was founded seven years ago by Kim Hyuk, who was operating a flour retail store at the time. One day, when Kim dropped by a company to make a delivery he saw leftover dumpling skins being sold as animal feed.

“I thought it was a shame that the food was given to livestock when there are people who are starving,” Kim said. “After talking with the presidents of about 10 food companies, I was able to persuade two of them to donate the leftover dumpling skins.”

At first, Kim worked in a corner of his retail store with one noodle machine and two volunteers. Today, there are 10 groups in Seongbuk District alone waiting to join the donation team. The apartment’s management office supplies the team with free electricity and water.

“There is now an efficient, independent charity system in place,” Kim said. “The 25 teams are in charge of different areas, so the noodles can be distributed evenly.”