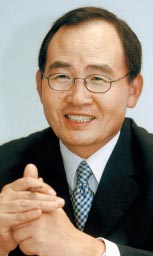 President Lee Myung-bak has nominated Yoon Eun-key, incumbent president of Seoul School of Integrated Sciences & Technology, as the president of the Central Officials Training Institute. Yoon’s predecessor, Chung Jang-sik, resigned in order to run for governor of North Gyeongsang in the provincial elections slated for June 2.

His nomination marks the first time that a nongovernment official could be appointed president of the institute since its establishment in 1961. The post is equivalent to the vice-minister level in the governmental organization chart. Yoon was chosen due to “his career background as a CEO of a business consulting firm and his broad knowledge about business management and related education,” the Blue House said.