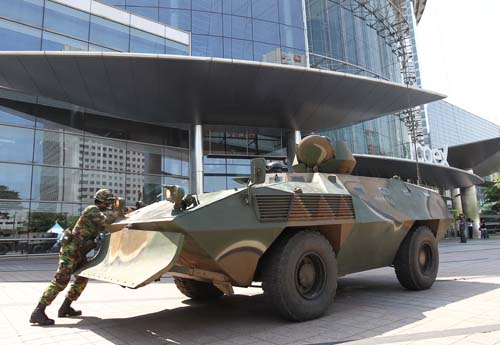 Soldiers engage in an anti-terrorist drill yesterday at COEX in Samseong-dong, southern Seoul, where the Group of 20 Summit will be held in November. As the drill simulated a real terrorist attack, some sections of roads surrounding the convention center were blocked from 9 a.m. until 4:30 p.m. About 800 soldiers, police officers and firefighters from 29 agencies participated in the drill, which was designed to check collaboration among related agencies. Armored vehicles and three helicopters were also mobilized in the anti-terrorist attack simulation.