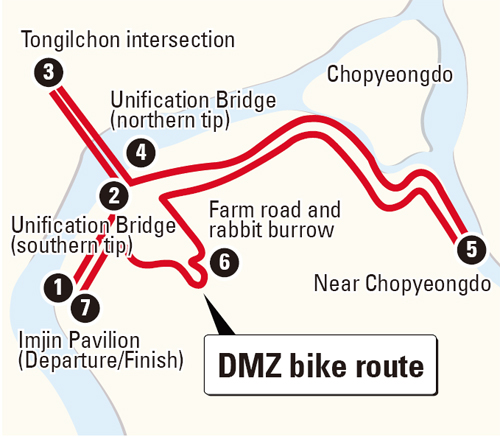 A new bicycle tour along the heavily fortified Civilian Control Line near the Demilitarized Zone in Gyeonggi will be opened to both South Koreans and foreigners starting tomorrow.

The tour, organized by the Gyeonggi Tourism Organization, will take place every fourth Sunday of the month. The 15-kilometer (9.3-mile) bicycle course will start from Imjin Pavilion and pass the Unification Bridge in Paju and the Tongilchon Intersection before coming back to Imjin Pavilion.

This area along the Civilian Control Line, which runs five to 20 kilometers south of the DMZ, had been closed to the public, except farmers and residents of the area, since 1953, when the Korean War ended with an armistice, but is now being opened for this bicycle tour.

“The DMZ has been chosen as the No. 1 tourist destination [in Korea] for foreigners and is the leading tourist attraction of the northern Gyeonggi region with over 5 million people visiting Imjin Pavilion yearly,” said the provincial tourism organization through an official release.

“We intend to make this DMZ bicycle tour a landmark program for the DMZ area,” said an official at the Gyeonggi Tourism Organization. The official added that because the tour course does not cross the DMZ line, the route poses no danger to tourists.

The Gyeonggi tourism office began pilot bicycle tours in the area in February. It said that in the future, if it receives the Defense Ministry’s approval, it plans to increase the frequency of the tours to twice a month and lengthen the bicycle course to up to 25 kilometers.

Those who wish to participate in the tours will need to submit applications online (http://ethankyou.co.kr). The site is available in Korean, English, Japanese and Chinese. The cost is 10,000 won ($8.80) per person and each tour will be able to accommodate up to 300 people. For more information, call 031-952-7805.

The Gyeonggi Tourism Organization said that all spots for the tour this Sunday have been filled.