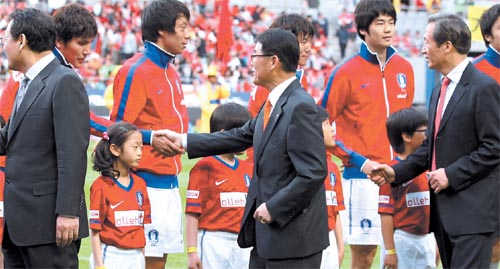 It has become a tradition that has proven beneficial for both parties involved.

Since E1, a liquefied petroleum gas provider, reached a sponsorship deal with the Korea Football Association in 2005, Korea has not lost in any of the 11 matches for which E1 was the title sponsor.

The record stood at seven wins and three draws when Korea chalked up another win over Ecuador in its final friendly game at home prior to the start of the 2010 South Africa World Cup.

The first of the E1-sponsored matches came on Oct. 12, 2005 in what was Dutch manager Dick Advocaat’s debut match. Korea defeated a formidable foe in Iran, 2-0.

Since then, Korea has hosted respectable opponents such as Sweden, Bosnia, Japan, Iraq, Uzbekistan, North Korea, Jordan and Australia over the years with the help of E1 and has not lost a match.

The match was originally scheduled to take place at the Kim Il Sung Stadium in Pyongyang but due to North Korea’s refusal to display the South Korean flag or play its national anthem, FIFA eventually sanctioned the match to be relocated to the Hongkou Football Stadium in Shanghai, China.

E1, for its part, has also benefited from its partnership with the Korea Football Association. As one of the largest LPG suppliers in the country, fulfilling over 50 percent of all LPG import demand in the country, E1 first reached a one-year deal with the KFA in October of 2005 for a sum of 1.6 billion won ($1.4 million) and reached another four-year deal in October 2006 worth 6.4 billion won.

It’s the largest sponsorship deal next to Nike and KT. The sponsorship gives E1 the right to sponsor two home games per year.

The advertising during the games has had a big impact on the company’s brand recognition among the general public.

According to data released by E1, public awareness of the company brand has increased by a total of three percent and such numbers are estimated to have a far-reaching effect on the company.