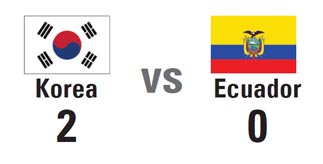 The national football team passed its last test on home ground before leaving for the 2010 World Cup with, shall we say, flying colors.

Neither team’s lineups featured their best players, but Korea outplayed their opponents from Ecuador much of the game en route to a 2-0 win at the Seoul World Cup Stadium last night with a total of 62,209 in attendance. With the game locked in a scoreless tie, Lee Seung-yeoul opened the scoring in the 78th minute and Lee Chung-yong added another in the 88th minute. Lee Chung-yong was selected Most Valuable Player of the match.

Huh Jung-moo had said prior to the match that he would focus on testing and evaluating his domestic players and would give the overseas-based players, returning from hectic schedules with their respective professional teams, a chance to rest and recuperate. 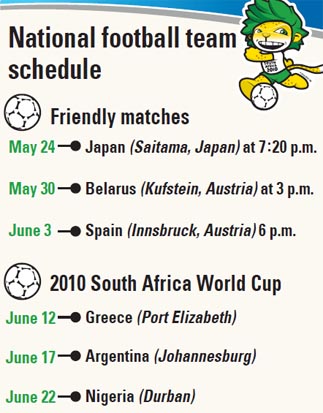 Park Ji-sung and Ki Sung-yeung were the only notable overseas-based players to start the game with Lee Dong-gook and Yeom Ki-hoon spearheading Korea’s attack at the forward positions. Both sides looked a bit sluggish in the first half but Korea proved to be the better side, pressing their opponents through much of the entire first half.

The biggest opportunity to score came in the 36th minute when Yeom hit the crossbar on a header on one occasion. Ecuador did not manage a shot at the net the entire first half.

The start of the second half saw Lee Chung-yong and Cha Du-ri enter the game and Korea continued to press Ecuador with several quality chances. Veteran forward Lee Dong-gook managed a solid shot in the 59th minute of the game which was turned away by the Ecuadorian goalkeeper.

Lee Seung-yeol was substituted into the match to replace Lee Dong-gook in the 66th minute and came through with the opening goal seven minutes later. The final shots-on-net count was nine for Korea and one for Ecuador.

The national team chose Ecuador as an opponent as a preparation for its group opponent Argentina. Being counted on as one of the favorites to win the tourney, Argentina boasts one of the world’s best players - if the not the best - in Lionel Messi.

The biggest task for Korea in their match against Argentina will come down to how well their defenders contain Messi, and this is where playing against Ecuador can come in handy for Huh and his defenders next month. Having qualified for the 2002 and 2006 World Cup events, Ecuador narrowly missed out on the 2010 South Africa World Cup by placing sixth in the 10-team regional qualifiers, but managed to win one and tie one against Argentina in the qualifying rounds.

“In the regional qualifiers, we showcased a defensive strategy based on containing Messi and it worked well for us. Sergio Aguero and Diego Milito also need to be kept in check,” said Ecuador manager Sixto Vizuete. “Korea is a quick and well-organized team. If they work on their passing skills, Korea will net good results at the World Cup. The high altitude of South Africa won’t be a huge factor if they depart early and get adjusted.”

Ecuador’s struggles were understandable when considering none of its top overseas-based players were included in the 18-man roster. Regardless of Ecuador’s weakened lineup, Korea’s defense played well in stopping its opponents.