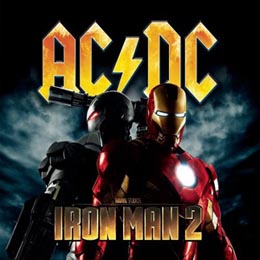 The soundtrack of “Iron Man 2” is basically is an AC/DC compilation, filled with the Australian heavy metal band’s hits.

Full disclosure: I haven’t yet seen Iron Man 2, but I assumed the film was populated with AC/DC songs. The full-throttle metal seemed like it would match Robert Downey Jr.’s testosterone-fueled portrayal of the armor-clad hero, but no. Apparently the only songs that show up in the film are “Shoot to Thrill” and the ubiquitous “Highway to Hell.”

If you know anything about rock music you already know what you’re getting into. AC/DC’s music is great when you’re working out your muscles (or your liver), or just need to get pumped. There’s a song on the album called “War Machine,” which is also one of the characters in the movie, so that makes sense, I guess.

The disappointing thing is, apparently the film has some sweet songs by the Clash, Queen and 2Pac too. Why leave them off the soundtrack? (Answer: Because then you wouldn’t have an AC/DC greatest hits album with Iron Man on the cover.)