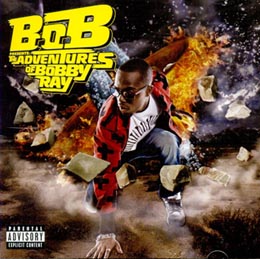 One song that can be heard almost everywhere these days is B.o.B’s “Nothin’ On You,” which became an even bigger hit in Korea when Park Jae-beom, a former member of 2PM, uploaded a cover on YouTube that has recorded over 4 million views.

Fans of the hit will be pleasantly surprised with the rest of the album, which focuses not just on Southern rap or pop but reaches into soul, rock, funk and doo-wop.

“Airplanes,” the second single, is simply perfect, thanks to the talents of Hayley Williams, the vocalist in Paramore, and Eminem’s input in “Airplanes Part 2.”

Considering that this is B.o.B’s debut album, one would expect more participation (or interference) from big-name producers, but most of the songs were produced by the artist himself, evidence enough of his vision.