From business and basketball to a Seoul taxi

From business and basketball to a Seoul taxi 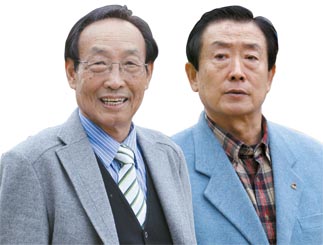 Take a walk through Seoul - particularly near downtown and Itaewon - and you’ll probably notice a few bright orange taxis. These newly painted cars are international taxis, designed for foreigners with drivers who are supposed to be proficient in foreign languages.

The fifth recruitment exam for the international taxi program took place on March 31, and of 186 applicants 113 made the cut.

Because of the special requirements, many of the drivers come from very unique backgrounds. Han Gwang-woo, for example, was once Japanese branch head of LG Electronics, and Kim Gye-wan was coach of the Singaporean and Vietnamese national basketball teams.

Kim has only been a taxi driver for two months, but he’s a veteran of the business world. Because of his 40 years of experience as a businessman, he still can’t get rid of the habit of wearing a suit and a tie in his cab every day.

“I was only able to meet business-related people in the very rigid environment of the corporate world,” says Han. “Ever since I started being a taxi driver, I’ve been able to meet a very diverse range of people. These new encounters are my happiness.”

Han started out at a Japanese semiconductor company that opened a branch in Korea, and he mastered the Japanese language and culture during this time. After being scouted by LG Electronics, he worked as the branch manager in Japan for eight years. He started out with only one other employee but expanded his operation into four areas - semiconductors, office instruments, computers and software - along with 20 other trusted employees. In 1994, Han was diagnosed with oral cancer, and after two years of surgery had to quit his job.

“It was probably because I worked myself too hard in Japan,” said Han. “Even while I was hospitalized, I didn’t stop working.”

Following this, he served as a vice president at a midsized company for 10 years. Even after retirement, he still couldn’t seem to sit still, and a friend suggested he become a taxi driver. “If you don’t work, you tend to become lazy,” Han said. “I just didn’t want to grow old like that.”

After only a month as a regular driver, Han heard about the new international taxi program. With his knowledge and experience from working in Japan, Han felt that driving an international cab would be the perfect job for him.

Although only his wife knows of his job as a professional driver, Han said that it makes him feel proud and happy. “It’s not like I’m doing something illegal. I had about 10,000 employees under me up until now. They will be quite surprised when they see this article.”

Kim said he sees his life as a basketball game. Starting in the 1980s, he worked as a coach for the Singaporean, Thai and Vietnamese national basketball teams, and after retirement he wanted to start a second life, or in his words, go into “overtime.”

“I have seen hundreds of basketball matches during my career and know from experience that even when there is little time left on the scoreboard, you still need to try your best,” says Kim. “Life is the same. You always should have the best game plan in the given situation.”

Kim had been interested in travelling and enjoyed meeting other people. With his long stays in other countries, he not only had the English proficiency but the knowledge of how to communicate with foreign visitors.

After 25 years of serving foreign basketball teams, Kim wanted to do many things, but found that it wasn’t easy trying something new in his mid-60s. Coincidentally, he saw an Internet ad recruiting international cab drivers and applied immediately.

“Some think that being this old and becoming a cab driver is something that they should be embarrassed about,” says Kim. “I think differently. Once you start minding what others think about you, you won’t be able to do anything. I will do my best with the feeling that this is a brand new game starting.”