HOW THE WAR BEGAN
Onslaught caught South off guard 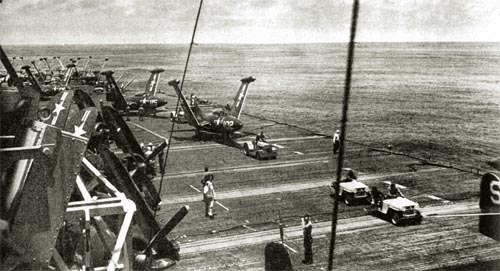 Before U.S. forces from the American continent could arrive to aid South Korea, the U.S. relied on the employment of heavy air attacks. Above: jet fighters take off from an aircraft carrier. [JoongAng Ilbo]


Looking back now, the Korean War was one South Korea was drawn into without any preparation whatsoever. From the common grunt to the commanders, everyone fought the enemy with determination, but without any proper training or equipment. Thus, the South paid a steep price.

One particular incident that comes to my mind from those tumultuous days occurred when the ROK 1st Division had entered Pyongyang, the very first unit among allied forces to do so, and was engaged in some mopping up duties. Suddenly, an American unit appeared out of nowhere and started to search public buildings in Pyongyang. Members of this unit wore the Indian head insignia belonging to the U.S. 2nd Division. They were members of a special unit that had received direct orders from General MacArthur’s headquarters in Tokyo to collect important enemy documents.

The soldiers of this unit searched every possible public venue in Pyongyang from the lowest district office to Kim Jong-il’s private office in search for clues about the enemy’s plans. One document that was discovered during the search was of utmost importance - a blueprint for the invasion plan of the South. The document had detailed information on the expected harvests in the South, from rice to barley, and the total amount of food the South would be able to produce. What was surprising was that the documents also included information on the production levels of sesame seeds. It just showed how thoroughly the North Koreans had prepared for their invasion of the South. 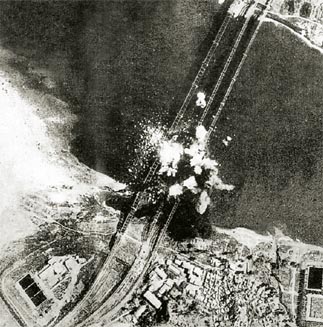 The Han River Bridge is bombarded by the U.S. Air Force in March 1950. From a U.S. military archive

Another reason Washington took an interest in the collection of the North Korean documents was because it was a perfect opportunity to take a look at the inner workings of a Soviet Union satellite state for the first time. A total of 1.6 million pages had been collected by October 1950 and sent to Washington after review in Tokyo. The documents shed light on what had caused the war and also the political maneuvering on the Soviet Union’s part as well as North Korea’s. The documents were made public in February 1977.

It is a well-known fact that the South was ill prepared to fight a North Korean Army that had prepared for a very long time.

At a time when the South Korean military had yet to see a tank, North Korea already had a substantial amount of armor ready, while it was also in possession of 122-millimeter guns that could overwhelm anything that the South had in its arsenal. While many of the houses that the North’s citizens lived in were in bad shape, the roads heading South were quite large and in good shape for obvious reasons.

The South Koreans got caught flatfooted at the outbreak of the Korean War, but in the months preceding it, the South Korean military was actually put on alert quite often, anticipating possible provocations. Especially at the beginning of June, the very month the Korean War started, the military was put on alert several times. Ironically, on the 24th, just one day before the outbreak of the Korean War, the general alert was called off and leave was granted to the soldiers and officers alike.

Fate had it that other circumstances at the time worked against the South. In May 1950, Col. Gang Mun-bong, at the time the director of operations at Army Headquarters, had concluded a study in which he compared the military strength of both Koreas. Naturally, the shortcomings of the South Korean military were apparent, but a bill asking the National Assembly to correct the problem was pending in the National Assembly due to provincial elections. In addition, a comprehensive defense plan anticipating a North Korean attack was only devised three months prior to the actual invasion, just further proof of how unprepared Seoul was at the time. That is why the initial North Korean onslaught couldn’t be stopped and the North Koreans were able to push deep into the South. 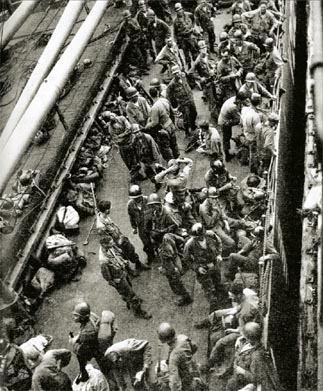 U.S. soldiers wait at an unknown location to be shipped off to the Korean Peninsula in June 1950. [JoongAng Ilbo]

After the war was over, North Korean leader Kim Il Sung lamented that the three days spent in Seoul had cost North Korea a decisive victory in the war. Those valuable three days of delay were a result of the heroic efforts of Gen. Kim Hong-il, who commanded Chinese forces against Japanese imperial forces during World War II. Back then, facing an enemy that had better equipment and was overall superior in every aspect, the general quickly learned stalling tactics, at times trading space for time. Such experience became invaluable when he was in charge of defending the Siheung area, as he was facing the exact same situation. With limited resources he had to fight an overwhelming foe.

Under his leadership, the South Korean units delayed the North Korean advance well into July, using the Han River as a general defense line. The general made the best use of the Capital Division, 3rd Division and 8th Division, using them expertly in halting the North Korean forces for a short but very valuable time.


60 years with the military, by Paik Sun-yup
[estyle@joongang.co.kr]