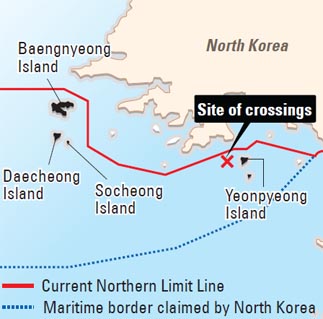 In an apparent attempt to highlight the disputed border in the peninsula’s western waters, North Korean patrol boats crossed the inter-Korean maritime border twice Saturday night and retracted after warning shots from a Southern ship.

The border violations took place at a time of escalated tensions between the two Koreas. South Korea is scheduled to announce the results of its investigation into the sinking of the warship Cheonan near the western inter-Korean sea border on Thursday, and speculation has grown that the incident that killed 46 sailors was caused by a torpedo attack by the North.

According to the Joint Chiefs of Staff, a North Korean patrol boat approached the Northern Limit Line, the de facto maritime border between the two Koreas in the Yellow Sea, at 10 p.m. on Saturday. The South Korean Navy patrol sent a warning to the ship by radio, and in response the North’s boat accused the South’s patrol of having violated its territorial waters.

The North Korean boat continued to descend and crossed the Northern Limit Line at 10:13 p.m. despite repeated warnings, according to the Joint Chiefs of Staff. After staying in South Korean waters for about 30 minutes, the ship went back at 10:43 p.m., the military said.

The two border violations took place about 15.75 kilometers (9.8 miles) northwest of Baengnyeong Island, the military said. It was the first western maritime border violation by the North since the South Korean Navy warship Cheonan sank in nearby waters on March 26.

The Northern Limit Line is the de facto maritime demarcation line between the two Koreas in the waters west of the peninsula. The line was unilaterally drawn by the U.S.-led United Nations forces in 1953 after the UN command and North Korea failed to reach an agreement. Pyongyang does not recognize the line, which was also not included in the Korean War armistice agreement.

North Korea regularly violates the western sea border and naval skirmishes have taken place in nearby waters in June 1999, June 2002 and November 2009. The latest deadly incident that took place in the area was the Cheonan’s sinking.

According to a military source, North Korean patrol boats crossed the Northern Limit Line about 20 times in 2009, but Saturday’s violations were the first since the Cheonan’s sinking. “Since the incident was the first since the Cheonan’s sinking and also took place on Saturday night, which is considered the most vulnerable time for the military, we are looking closely into the North’s motive,” the official said.

A South Korean government source also told the JoongAng Ilbo that the North Korean military had recently issued an order to open fire on all South Korean vessels that cross the Northern Limit Line. “The order was given to all North Korean units that are in charge of the western border, including the Navy’s fleet command and the IV Army Corps,” he said.

The IV Army Corps is the North’s most forward army unit and it conducted an intensive firing drill in January in cooperation with the country’s Navy.

Since the North has made a renewed attempt to defy the Northern Limit Line, military officials here are concerned that Pyongyang would stage further provocations depending on the international responses to Seoul’s announcement of the outcome of the probe into the Cheonan’s sinking.

A senior government official told Yonhap News Agency yesterday that a team of international investigators has concluded that a North Korean torpedo attack had sank the Cheonan.