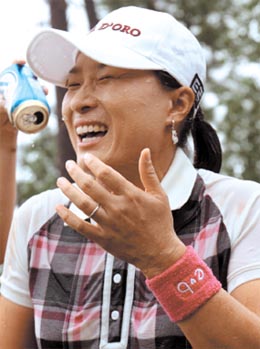 Golf legend Pak Se-ri, 33, who had been considered past her prime, silenced her critics with a dramatic win at the Bell Micro LPGA Classic in Mobile, Alabama yesterday. It was the golfer’s first win in three years.

After pulling off a win at the 1998 U.S. Open in her rookie season, Pak became a role model for young female golfers in Korea, dubbed the “Pak Se-ri kids,” including Shin Ji-yai, Park In-bee, Lee Seon-hwa, Ji Eun-hee and Kim In-kyung. The Hall of Famer last won the Owens Corning Classic in 2007. Pak has won 25 LPGA events and six KLPGA events and was named the 1998 LPGA Rookie of the Year.