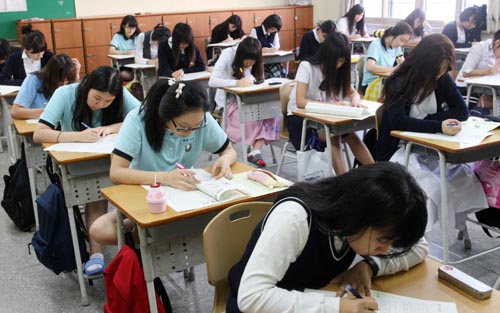 South Korea’s progress over the last half century has been remarkable - and it would not have happened without the outstanding performance of its school system. The country consistently wins high marks for educational achievement in international benchmarking exercises. In the most recent TIMSS1 (2007) assessment for eighth graders, for example, Korea ranked second in the world in mathematics and fourth in science.

One key to this success has been the policy of attracting top graduates to teaching, and then training them rigorously early in their careers. As one Korean official told McKinsey, “The quality of an education system cannot exceed the quality of its teachers.” Korea has shown the rest of the world what can be achieved by acting on that conviction. It is almost unique in having made an explicit choice to pay teachers significantly above the average GDP per capita. In Korea, the average teacher’s salary is 229 percent of GDP per capita compared to the Organization for Economic Cooperation and Development (OECD) average of 122 percent. To help fund higher salaries for teachers, the nation has accepted the trade-off of relatively large class sizes. In Korea, classes average 32 children in primary schools and 36 in secondary schools, whereas elsewhere in the OECD an average of 25 or even fewer would be normal. Since the international evidence shows that the quality of teaching far outweighs the effect of smaller classes, this decision has been richly rewarded by the performance of Korea’s students. It could be argued, therefore, that Korea’s educational challenge is merely to maintain current standards. That conclusion may be tempting - but it is mistaken. For all of Korea’s achievements, its education system faces challenges that could threaten the nation’s long-term economic competitiveness.

Improving high schools is one such challenge. Primary-school teachers comprise an elite profession; they generally come from the top 5 percent of graduates, according to McKinsey research, and they hold what is considered to be a high-status profession. The result is general excellence. High schools, however, are less effective. Although students continue to do well in international exams, there is an overemphasis on standardized admissions tests and rote memorization. This risks spawning a nation of dutiful crammers who have a sound knowledge of basic facts and skills but lack the motivation to learn or think independently.

It’s fascinating, for example, that while 15-year-old Koreans tested well in science on the OECD’s Program for International Student Assessment, which evaluates students in 57 countries, they appeared less engaged than many of their peers. On average, 21 percent of the students surveyed by the OECD reported watching science shows on television regularly; only 9 percent of Koreans did. Thirteen percent visited science-related Web sites, compared with 6 percent for Koreans. And while the Korean students showed a good knowledge of science, they were less successful at such related skills as identifying scientific issues and explaining phenomena scientifically. In addition, it is easier to become a high school teacher than a primary-school teacher, and as a result the role has less social status. A 2005 World Bank report found that only 25 percent of general high schools in Korea were considered well functioning, compared with two-thirds of middle schools.

This is a source of frustration to many Korean parents, who care passionately about education and spend a higher percentage of household income to educate their children than their counterparts in many other nations do. One result is the existence of tens of thousands of private-sector hagwon; more than 80 percent of adolescents attend one of these cram schools. There, they are drilled on how to excel on the multiple-choice national college entrance exams, which govern admittance to the nation’s top universities. Success on the CSAT, as it is known, means admittance to the universities that make up the “SKY” elite: Seoul National, Korea and Yonsei universities. For Korean teenagers, a school day that lasts more than 14 hours is not unusual. At its worst, this single-minded pursuit can result in sleep-deprived teenagers, anxious parents and stressed-out families. There is also concern that the reliance on out-of-school tutoring, which the rich can obviously afford more easily than the poor, is fostering inequality in a society that values an egalitarian ethos. This polarization was an important issue in the 2007 presidential campaign.

A 2007 East Asia Institute survey of Korean parents found that three out of four respondents described themselves as “unsatisfied” or “very unsatisfied” with the nation’s public-education system. Of course, grumbling about the state of the public schools is all but universal (and many countries would love to have Korea’s problems), but it is important for the Korean government to increase public confidence in its high schools. The phenomenon of “wild geese” (a term that refers to Korean families whose fathers stay home in Korea while mothers accompany children overseas for school) provides further evidence of the challenge. The number of primary- and secondary-school Korean students enrolled in foreign schools (and not accompanying parents who are employed abroad) has risen to almost 25,000 in 2008, up more than sevenfold since 2000.

The fact that other nations are launching bold reforms adds to the challenge. Australia has adopted a comprehensive education reform based on the global evidence of what works; as a result it is likely to see significant gains in the next decade. Singapore, Hong Kong and the Canadian province of Ontario also are pursuing well-considered, whole-system reforms. Reforming the whole system in a considered way is demonstrably more effective than launching numerous unconnected initiatives, which, sadly, is a much more common approach. The increasingly likely prospect of an effective school system in China also has far-reaching implications for the competitiveness of Korea’s economy. And don’t count out the United States, public education’s sleeping giant; there are signs of successful reform there, too. Korea will have to keep up with this competition simply to maintain its position.

Changes within Korea offer other compelling reasons for educational reform. The population is aging. Data from its National Statistical Office suggests the number of Koreans of working age will shrink to less than 32 million in 2030, from 34.5 million in 2004. The “dependency ratio” - the proportion of elderly Koreans drawing retirement benefits to those of working age who pay taxes - will rise to 37.3 percent, from 14.9 percent. This presents a substantial productivity challenge for younger Korean workers - a challenge that can only be met through substantial improvements in education.

China’s economic rise adds urgency, too. For Korea, the era of low-wage competition is over. In the decades to come, Korea must move quickly up the value chain - an ascent that will not be possible without better education.

Korea’s ethnic homogeneity complicates the task of reform. Its cities, unlike other global centers such as Singapore Sydney, or Los Angeles, haven’t had to wrestle with the problems that often accompany a multicultural population. But diversity also helps drive economic growth and, indeed, often makes cities more attractive places to live. In places such as Silicon Valley and Toronto, diverse subpopulations connect back to skilled networks in their countries of origin (notably India and China) and have played crucial roles in spurring innovation. In cities like Amsterdam, London or New York, cultural diversity adds enormously to the quality of life and is a magnet for global talent.

If Korean cities do diversify, the schools, including the primary schools, will need to learn the lessons from places such as London, where education has helped to address racism. If they do not diversify, educators will have to find ways of imbuing future generations with a sense of openness to ideas, cultures and perspectives from the wider world. As the outgoing EU Commissioner on Education put it: “In the 21st century, the winning strategy is openness.” If Korea’s parents and teachers fail to instill in their children that sense of openness, they bequeath them a future that will be economically - as well as culturally - less rewarding than it could be.

One way or another, Korea will be forced to rethink what it teaches. The curriculum of the 20th century put a premium on knowledge and recall, with high standards of reading, writing and math. In addition to these vital subjects, the curriculum of the 21st century must teach its students something much more complex: the capacity to think - to think for themselves and to think in teams. They must think deductively, inductively and creatively. If Koreans are to make the most of their hard-won democratic institutions and thrive in the global marketplace, they must develop the attributes of resilience, adaptability, and the capacity to listen, argue and persuade.

Meeting these standards will require an education revolution. It will require even the best teachers to rethink the way they teach - to rethink the staffing model, the structure of the school day and the school year (the most effective supports for teachers and school leaders), and the creation of better relationships among schools, communities and businesses.

Hong Kong’s reform has completely reinvented the high school curriculum, with a focus on ensuring that young people learn how to think and collaborate, and how to absorb knowledge. They have also expanded the length of university programs from three years to four. Japan is seeking to shift from a traditional focus on learning facts and skills to a new curriculum that includes creativity and critical thinking. South Korea will need to move boldly in this direction as well.

*The writer is an expert partner in McKinsey & Company’s global public-sector practice.